One thing I always find aggravating is remembering the option status of all Blue Jays players, especially when thinking about roster construction. On top of that, there's really no one single place to find the information quickly, so I have to think and go looking across the Internet. Then I forget or mis-remember and have to looking again the next time. So I decided to create a file in Excel, and to post it here for the benefit of any others who care about this type of thing. I included all players (to the best of my knowledge) who have ever been on a 40 man roster, and divided it between those currently on the 40 man and those not on the 40 man.

A quick background on option years

Once a player is added to the 40-man (major league) roster, he must stay on the 25-man active roster during the season unless he is sent to the minors on optional assignment. In general, players can be optioned in three separate years (a small number will get a fourth option year: details here). Optional assignments last for entire seasons, so a player can be optioned and recalled multiple times within the same season and it only counts as one option year used. Mike McCoy was optioned to Las Vegas and recalled six different times in 2011, but it only counted as one option year. If a player is optioned during a year but recalled having spent 20 days or fewer in the minors on optional assignment, then an option year is not considered to have been used. However, the player gets MLB service time credit for those days spent in the minors.

Once a player's three option years have been exhausted, he cannot be sent to the minors without having being put on waivers and exposed to other teams claiming the player. If he passes through waivers unclaimed, then he can be sent outright to the minor leagues. Additionally, players with 5 or more years of MLB service time cannot be optioned without their consent. If a player has been previously outrighted to the minors, or has 3 more year MLB service time, then he has the right to refuse the outright assignment and to become a free agent. Alternatively, he can accept the outright assignment, and still have the right to elect free agency at the end of the season unless he has been returned to the 40 man. An example of this is Scott Richmond, who was sent outright in 2011, and then again in 2012. He accepted the 2012 outright assignment, but then elected free agency at the end of the season (which he wouldn't have otherwise been entitled to do).

Since players with 5 years of service time can't be optioned (at least unilaterally), I have not included them. There are 14, and they are listed below. 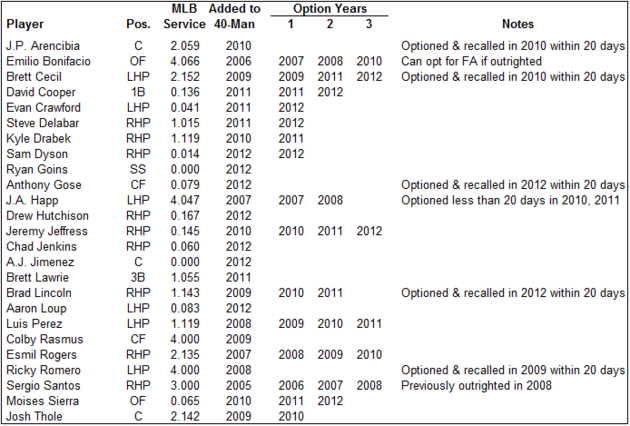 Again, I have not included the players with more than 5 years service time, but listed them below. I have shown explicitly for this group of players if they were previously outrighted since most of them have bounced around during their careers. 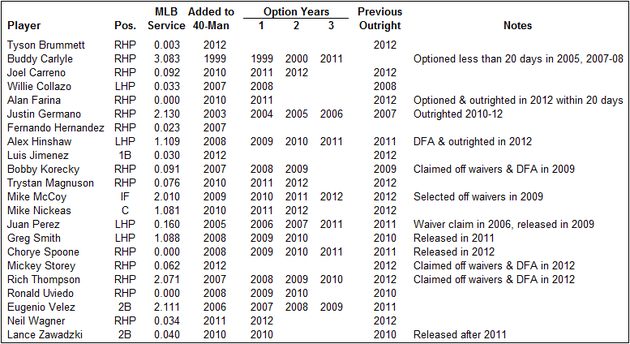 I've done my best to ensure accuracy, please let me know of any errors or omissions spotted.