Our Toronto Blue Jays had another busy week last week: the club avoided arbitration for another year and signed Colby Rasmus (one year, $4,675,000), Emilio Bonifacio (one-year, $2,600,000), Josh Thole (two-year, $1,250,000 per year), and J.A. Happ (one-year, $3,700,000), and that the latter two will likely start the year in AAA. We found out that Darren Oliver is returning to the club for another season and that his agents demands for more money or a trade to the Texas Rangers didn't come from him. Alan Farina was suspended for 50 games for a drug violation. A very excited and happy Jose Reyes was formally introduced in a very short press conference. And the Buffalo Bisons had a Hot Stove Luncheon for their fans and also unveiled their brand new uniforms.

This has got to be a quiet week, right? There isn't much more left for the club to do: find the 25th man on the roster, hire a radio commentator, and announce the Bluefield Blue Jays' hitting coach. That's about it.

Although R.A. Dickey won his Cy Young award with the New York Mets, he's now a Blue Jay so here is his acceptance speech at the BBWAA dinner in New York on Saturday night. He thanks folks in the Mets organization, his agent, his wife, and the Jedi Council of Knuckleballers. And he looks damn good in a tux.

ESPN's Adam Rubin has a transcript of Dickey's speech if you wish to read it instead.

Toronto Blue Jays' window of contention - ESPN (Insider Only)
Jason Martinez of MLB Depth Charts dropped the ball in his contribution to ESPN here. He compiled a "Window of Contention" series, looking at when each team in the MLB is "best suited to contend." According to him, 2013 is the Blue Jays' "optimal year of contention," while the Orioles should wait until 2014, and the rest of the division until 2015. But that is not the problem. Here is an excerpt from his section on the Blue Jays' bullpen weaknesses:

"Steve Delabar and Brad Lincoln are unproven in the late innings, and closer Sergio Santos is coming off of shoulder surgery. So although the group appears capable, and should be deep enough to deal with a few injuries here or there, this is not a group that strikes fear into opponents late in the game -- At least not yet."

No where in the full article does he mention Darren Oliver or Casey Janssen. Lincoln was never ticketed to be a late inning guy--I believe he has a rotation job in Buffalo. And later Martinez mentioned that the Blue Jays should sign a free agent reliever with late-inning experience, but if they don't do that, Marcus Stroman could "make an impact out of the Jays' bullpen sometime during the second half." Unless there is a rash of injuries or something completely unforeseen, I don't see Stroman appearing with the team until September at least.

The amazing Darren Oliver @southpawDO28 - High Heat Stats
Speaking of Oliver, Andy and the friendly folks at High Heat Stats writes about the wily veteran reliever. Read through the comments too for more about Oliver... including the fact that he is #5 in reliever WAR over the last five years, trailing only Mariano Rivera, Joakim Soria, Jim Johnson, and Sean Marshall, and that he is #2 after Mariano for ERA+ in ages 37-41.

The trade that almost was - Sportsnet.ca
Shi Davidi chimes in with his three guesses of the "mystery trade" that never happened this offseason.

And Now…Your Final Five SBXLVIII Logo Contenders - Uni Watch
Several scrolls down on this very lengthy post over at Uni Watch, you'll find reader Matt Malinoski's tweaks to the Toronto Blue Jays' uniform set. Sorry, I'm not a big fan of his proposed changes. I do like the 1960s-style script for the Orioles though.

Down On The Farm

Toronto Blue Jays determined to bring a winner to Buffalo, too - National Post
In a report from Buffalo, John Lott writes about the Blue Jays general manager Alex Anthopoulos' commitment in building a winner in Buffalo. It is likely that the Bisons' rotation will be made up of J.A. Happ, Brad Lincoln, Justin Germano, Claudio Vargas, and Chad Jenkins, all of whom have had big league experience. The bullpen could see the likes of Sam Dyson, Evan Crawford, Tommy Hottovy, Mickey Storey, Aaron Loup (if he isn't in Toronto), and AAA All-Star closer Chad Beck. Dave Bush could also be in the mix there.

Most of the starting offense have tasted the big leagues as well. Two of the three outfield spots will be occupied by Anthony Gose and Moises Sierra. Catching will be Josh Thole (Anthopoulos said that the big league backup catching job is Henry Blanco's to lose in the spring), David Cooper will be at first base, and if he doesn't win the 25th spot on the roster, Mike McCoy would be at third. In terms of players who have yet to make it to the Show, Bisons fans will likely see Ryan Schimpf at second and Ryan Goins at short. Assuming that the Blue Jays won't have to dip too often into AAA, this could be an International League playoff team.

Bisons load up on veterans - The Buffalo News
Amy Moritz writes the story from Buffalo's perspective. A good quote from Anthopoulos:

"[W]e’ve never really gone into an offseason saying, ‘Hey, what do we have to do to win down in Triple A?’ It’s the first time. They’ll be some trial and error. I hope what we did worked, but we’ll be able to adjust. ... I think the rotation is going to be solid with a lot of experience. The offense has a chance to be good."

My favourite line from that story is this:

And while Celery has not won a Chicken Wing race in two years, it gets its own bobblehead, to be given away on Aug. 3.

I have no idea what a Celery bobblehead would look like but I'm pretty sure I'll show up for that game if I could.

If you are in the Vancouver area you should check out the Canadians' annual Hot Stove Luncheon this coming Friday. Jared and I had a very good time in Buffalo, and I'm sure you'll have an even better time with Alex Anthopoulos probably being attentive rather than having his head down on his phone negotiating salary arbitration figures: 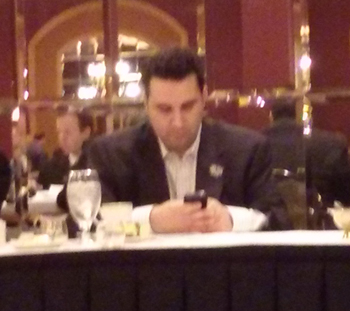 Paul Beeston, Brett Lawrie, and Brandon Morrow will be there along with the Jays' director of minor league operations Charlie Wilson (who is super friendly by the way). Unfortunately it is $75, which is three times what we paid for in Buffalo, but it is going to be held at the Fairmont. If you are able to go be sure to post a FanPost or a comment to let us know how the event was!

I don't have an online subscription to Baseball America, but I did read this in print (pigments on dead trees!). John Manuel writes about Mickey Storey's wild offseason, being plucked on waivers three times (to the Astros than the Yankees than back to the Astros then finally to the Blue Jays). The number of waiver claims followed by an immediate designation for assignment has been a running joke here and in other parts of the Blue Jays blogosphere this offseason, but this piece reminded me that players are human beings with family, too. This quote from Storey about all the jokes on the Internet made me feel like a dick for making punny headlines:

"I could see the humor in it if I had a bad year, but I didn't. It was my best year. It's left a bad taste in my mouth."

Instant replay for beginners - Baseball Nation
Grant Brisbee's piece on Jason Stark's report about instant replay changes that may be coming to Major League Baseball in 2014.

The 1997 Atlanta Braves top the best rotations in MLB history - ESPN (Insider Only)
In an Insider article, Buster Onley writes about the best rotations in baseball history, led off by the 1997 Braves (Maddux, Glavine, Smoltz, Neagle). The 1966 Dodgers (Kofax, Drysdale, Osteen, Sutton), and the 2011 Phillies (Halladay, Lee, Hamels, Oswalt) fill out the top 3. Here's hoping that the 2013 Blue Jays will make the list next year at this time!

This post is dedicated to baseball legends Stan Musial and Earl Weaver, who both passed away on Saturday.