Looking Back at Gibbons' Bullpen Management

A look back to the 2005-2007 years when John Gibbons previously managed to look for trends in his bullpen utilization.

Share All sharing options for: Looking Back at Gibbons' Bullpen Management

With the return of John Gibbons to the manager’s chair and an extremely full bullpen at the moment, I thought it would make sense to look back at Gibbons’ previous tenure with the Blue Jays to see what type of bullpen utilization he employed.

While this may frustrate us, it can also help get us ready for his reliever deployment and perhaps even hint at which relievers may make the team out of camp.

Gibbons was the manager for the final 50 games of 2004 and the first 74 games of 2008, but this analysis will look at just the 2005, 2006 and 2007 seasons. Breaking down those part seasons is likely more work than it’s worth since we have three full seasons at our disposal already.

*Note that for swing-men, all stats are for relief appearances only except for hand-specific stats, as I couldn’t break the stats down based on handedness AND role together. (Double note: I realized afterwards that I could do this, thanks to Fangraphs custom leaderboards, but I don’t think it was worth re-doing.) 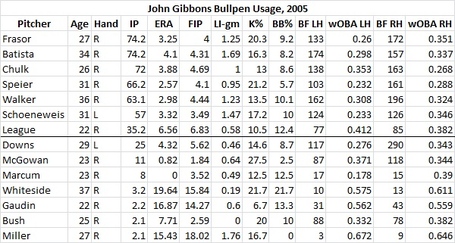 Although it’s just one season, the thing that stands out the most about Gibbons’ rookie performance is that he went very light on lefties in the bullpen, using just Scott Schoeneweis and Scott Downs. Lefties threw just a combined 82 innings out of the ‘pen for him and neither was utilized in LOOGY fashion. It also looks like, other than Brandon League, Gibbons preferred veteran options in his bullpen, although part of this may have been due to the options available to him at the time.

He also doesn’t appear to favor a particular type of pitcher based on K% or BB%. Of his core seven, there was a fairly strong relationship between FIP and LI-gm (the average leverage index when a pitcher enters the game), with FIP explaining nearly 60% of the variation in leverage index. 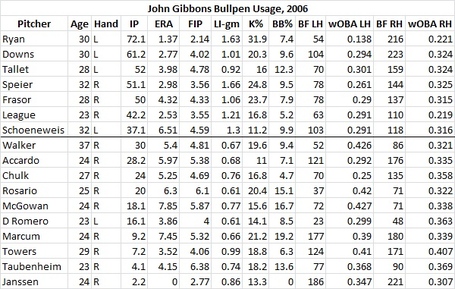 Holy lefties! A complete flip from 2005, but the transition of Downs to full-time reliever and the signing of B.J. Ryan, who was actually good, will do that. Once again there’s a strong indication that Gibbons was good at putting his best reliever out in the highest leverage situations, and once again there is a preference for an older bullpen. There doesn’t, however, appear to be much LOOGY deployment except in the case of Schoeneweis, and a bit for Jeremy Accardo, who was hell on lefties that year.

Look at the names on that list. This year really took me back, for whatever reason. Josh Towers! Davis Romero! Coco Rosario! Chulkamania running wild! Awesome. 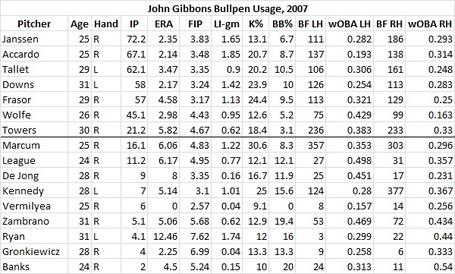 This table doesn’t have quite the nostalgic feeling as the 2006 one, with B.J. Ryan imploding and a handful of call-ups or swing-men completely blowing their opportunity in the 'pen. It was the emergence of Casey Janssen as a strong relief option, though, which continues to pay dividends today.

We once again see Gibbons employ just two lefties, one of whom was a long reliever in Brian Tallet. Downs was used closer to the LOOGY role, and we again see strong recognition of Accardo’s abilities to get lefties out (although letting Brian Wolfe face so many lefties is troubling).

For a change, 2007 also had a younger bullpen, caused in part by the 31-year old Ryan’s injury. Finally, in terms of leverage, Gibbons once again used his best relievers in the most crucial situations.

Are there any trends? Concerns? What about for 2013?

It’s tough to get a complete feel given the vastly different bullpens year-to-year, but there are at least a few positives to take away. Gibbons does appear to recognize handedness advantages and definitely knows to deploy his best relievers in the highest leverage situations. This might seem like Managing 101, but it’s also something that I remember being a criticism of Gibbons during his last tenure (perhaps it was just really bad in 2008 when he was canned?).

Gibbons will have a lot of options for his final three bullpen spots this season, assuming Janssen, Darren Oliver, Sergio Santos and Esmil Rogers are assured of spots, as confirmed previously by management. J.A. Happ and Brad Lincoln, and perhaps Brett Cecil, Chad Jenkins and Kyle Drabek, could be tabbed for starter duty in Buffalo to provide rotation depth. Assuming that happens, that would leave three spots for Luis Perez (if healthy), Aaron Loup, Jeremy Jeffress, Sam Dyson, Steve Delabar and Evan Crawford to fight for, plus any other late camp invitees. You’d assume at least one other lefty would make the squad, perhaps even two more if Cecil or Perez are tabbed as long-men in the bullpen.

My guess at present: Janssen as closer, Santos and Oliver as eighth inning guys, Rogers, Loup and Delabar in the middle innings and Cecil as the long-man. However, it’s insanely early to be trying to predict this stuff.

What’s your ideal bullpen configuration to start 2013, keeping in mind that some of these guys will need to be starting at Triple-A for rotation depth?