Trying to Figure Out Colby Rasmus

One of the most inconsistent and frustrating players in baseball has a wide range of possible outcomes in 2013.

Share All sharing options for: Trying to Figure Out Colby Rasmus

Too gain your trust as a new guy here, I want to share something with you: Colby Rasmus had me, hook, line and sinker.

On July 13 of last year, I wrote this piece, wondering if Rasmus’ "break out" was for real or a mirage. If you don’t want to read it and just want to laugh at me, here is the concluding paragraph from that article:

The statistical profile, combined with the fitting narrative of having worked through the kinks of growing up as a major leaguer and the obvious change in swing mechanics, means we can be guardedly optimistic that 2010 and 2012 Colby, a 25-year old center-fielder with plus defense and an emerging profile as a well above-average hitter, is the Colby that we’ll get to enjoy for a long time.

So…yeah. From that date on, Rasmus fell apart. He OPS’d .657, .508 and .575 in July, August and September respectively, dropping his season OPS down to .689. He had a .289 on-base percentage, which is Arencibia-esque, and not at all what was expected of him, especially since he got 408 plate appearances batting second.

Anyway, his seasonal OPS+ finished at just 85. Thanks to defensive contributions, mostly from being an average defender at a difficult position, he ended up being worth 1.4 wins above replacement, per B-Ref and Fangraphs. It made for a season that was slightly better than his 2011 in value terms but still well below his okay rookie season in 2009 and his excellent 2010 season.

To be fair, at 1.4 wins, he’s still well worth is $4.7M contract for 2013, but the expectations were much higher for Rasmus, and his growth could be the key difference between a good lineup and a great lineup for the Jays.

In the July article, I highlighted swing changes as a possible reason for his successful first half of the season. I don’t really remember if he got away from these changes. While it’s possible, it seems unlikely a player would abandon a successful mechanical change.

Another explanation I suggested was that 2011 was just really bad for off-field reasons. I don’t think there was anything to suggest Rasmus was struggling in the clubhouse, and he continues to be a likeable and involved player off the field.

The big issue, perhaps, is that his hot streak was predicated on a lot of small incremental improvements rather than one particular breakthrough, so maybe he needed to be walking more, striking out less and hitting more line drives all at the same time to sustain success.

To try and find out, I looked at some key statistical indicators over his career in increments of years, half-years and months.

But first, a caveat: Per this awesome De-Lucker from Bradley Woodrum of Fangraphs, we see that Rasmus had some pretty poor luck with BABIP and his wOBA relative to what we would expect given his profile. His .259 BABIP should have been expected to be .304 given his profile, which would have boosted his wOBA from .297 to .328. So before we even break down any advanced stats or indicators, we know that Rasmus was one of the 50-or-so unluckiest hitters in the league in terms of how poor BABIP luck impacted overall results. 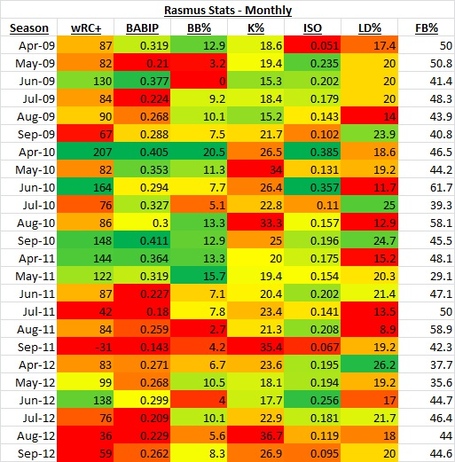 What become scary from these charts, which are heat-mapped to league average numbers, is that Rasmus has a lot more bad months than good. It seems, from the wRC+ column, that Rasmus might be a mediocre hitter with some great hot streaks mixed in.

However, the BABIP column is perhaps the most telling. He’s spent most of 2011 and 2012 on the low side for BABIP, which would be fine if he was a fly-ball hitting first-baseman with no wheels. But he’s not. He’s a somewhat-speedy hitter with more or less an average batted ball profile across the board, meaning he’s the type of player we should expect a league average BABIP from.

In the yearly chart, discipline information is also presented, and there really aren’t any drastic changes to approach over the years.

What do we make of this?

It’s difficult to say, really. "Good Colby" is very, very good. "Bad Colby" is very, very bad, although still worth trotting out there because he plays a tough position pretty well. You definitely give him another year to figure things out, especially since he could be batting seventh on this team.

In addition, Bill James’ projection system shows him improving his walk rate, strikeout rate, ISO, BABIP and thus his wOBA up to levels higher than any other season except 2010. The .317 wOBA projection turns him from a Gordon Beckham/Jamey Carroll kind of value with the bat to a Howie Kendrick/Jason Kipnis kind of value (not great, but not bad when you once again remember the position he plays).

What do I expect? Ever the optimist and card-carrying member of #RasmusNation, I’m obviously hoping for a bounce-back once again. He showed for nearly half a season last year that he can wield a valuable stick, and hopefully another summer to reflect and adjust will bring with it even further improvement. He is, after all, the same age as me (26), and I certainly don’t think I’ve peaked yet.

It’s going to be an interesting year watching Rasmus. He could be a table-setter hitting second, be left to figure things out in the seven-hole or being pushed out of town by Anthony Gose or 2014 Free Agent Center Fielder X. He has a lot on the line.