Remember last month when the new Blue Jays batting practice caps were leaked by ESPN and I wrote that it was "ugly but at least not racist"? Well, it turns out that it was even uglier than I could have imagined. I've already written about how I didn't think the simple maple leaf connected enough to the Blue Jays so I won't rehash that argument here.

There were a couple things that I did like from the leaked version. First, I thought that it was interesting that this would've been the first Jays cap in franchise history to not have a bird logo or the letter "T" on it. But nope! They had to throw in the regular cap logo in the back of the cap just above the Major League Baseball logo, making the back way too busy. Second, the leaked version showed a double outline for the red leaf (blue then white), which would have been a nice nod to the triple-outlined leaf that appeared in the primary logo from 1997-2004. Of course, now we only have a simple white outline. And thirdly, it doesn't even look like the red part of the front leaf is stitched with "puff" detail like the crest in the authentic jersey (see below). Weirdly enough, it looks like the logo in the back has the detail stitching, but the front leaf (which is three times larger) is just plain flat. 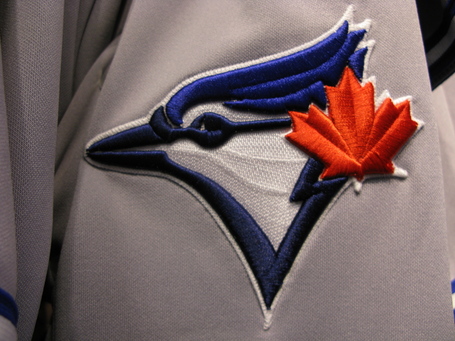 I get that the Blue Jays are the only team from Canada and that they are looking to expand their reach from coast to coast to coast, but please, please, stop shoving their Canadianess in our faces.

At least we can look forward to MLB's next round of batting cap redesigns in a couple of years. Maybe they could use this one proposed in my previous post: 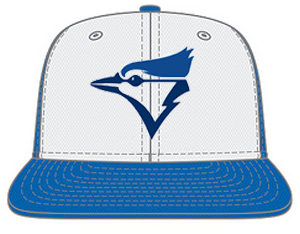