Share All sharing options for: Timeline of Blue Jays Coaches, 1977-2013

With the recent departure of Dwayne Murphy and Chad Mottola, I decided to compile a timeline of all the official coaches in Blue Jays franchise history because for some reason I consider that fun. My two main sources are the Blue Jays Media Guide and this page on BlueJays.com.

Note: a limit to this chart is that it does not indicate when a coach is hired or dismissed during a year, for example, the chart shows that Gary Denbo served in 2008, but he was actually fired halfway through the season. 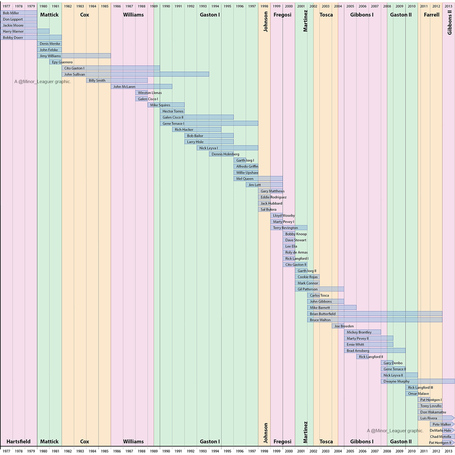 Click here for the high resolution version of the chart for you to browse and print out as a poster for your room or something.