Five Reasons For Blue Jays Fans To Like The Cardinals

On Wednesday the World Series will get underway and most Blue Jays fans will actually have a horse in the race this time and it will be the St. Louis Cardinals. I'm here to tell you why.

1. Birds have to stick together

It's a rough world out there these days and if one team of birds can't count on another teams of birds for their support then I'm not sure what point there is to living anymore. Cardinals and Blue Jays have been friends for centuries and in such an important moment for the Cardinals, it's essential they have our support. 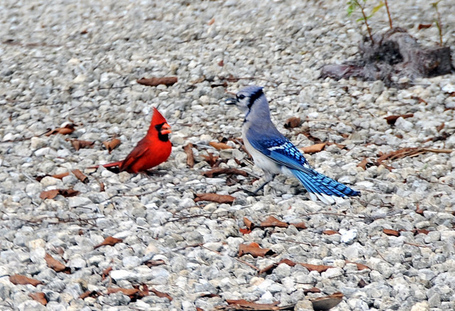 In the summer of 2011 before their World Series run, the Cardinals sent Colby Rasmus to Toronto and after a rough start to his time north of the border he broke out this year in a big way. With nearly 5 WAR this season, it's safe to say the trade worked out for both parties. After Rasmus left, the Cardinals stuck Jon Jay in centre field and he picked up where Rasmus left off. A left-handed hitting and throwing player in a Rasmus-like mould, Jay has matched the stats of Colby almost perfectly other than his lack of power. If we squint when we're watching the games in the next few weeks, maybe we can convince ourselves we're watching Colby Rasmus play in the World Series.

3. Their Catcher is Actually Good

To stay in the dreaming theme of this post, we will now turn our attention to the Cardinals' catcher, Yadier Molina. Arguably the best backstop in the league, Molina has put up six fantastic seasons in a row and puts most other catchers in the league to shame. By rooting for the Cardinals, fans of the Blue Jays can support a team with an above average catcher for a few games before snapping back into reality after the World Series ends.

4. Their Manager is a Former Blue Jay and He Played Out His Contract

Mike Matheny played one year in Toronto in 1999 as a backup catcher behind Darrin Fletcher before he was released and subsequently signed by the Cardinals. He played 57 games with the Blue Jays that year hitting .215 and three home runs. The team wasn't amazing that year so it's a little surprising he stuck it out until the end, instead of just leaving halfway through.

5. They're Not From Boston

I wasn't 100% sure about this before I began writing this, but after doing a little fact checking I've confirmed my suspicions. The Cardinals play in St. Louis and do not play in Boston. Don't believe me? Look at this: 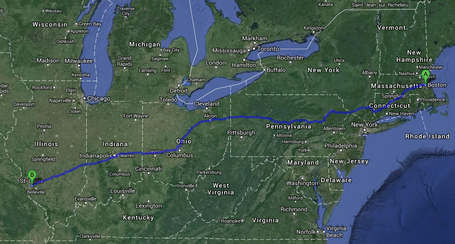 It's actually a pretty big distance between the cities, which is awesome.

Now that you have all the information you need to persuade you to root for the Cardinals in the World Series, I hope you'll be 100% behind them come Wednesday Night.