Share All sharing options for: Unveiling Bud Selig's post-annexation plans for Canada and the United States

Allan Huber Selig, a 79-year old man who prefers to be called "Bud" and current Commissioner of Baseball, announced his intention to retire from the position in January 2015. It has been suspected by many [citation needed] experts and analysts that before retirement he will seek to annex the United States and Canada to create the Empire of Major League Baseball. Furthermore, some[citation needed] say that one of his first actions will be to dissolve the states, provinces, and territories that make up of the two former independent countries of United States and Canada and to rearrange his Empire into 30 sectors, one for each Major League clubs.

It is believed[citation needed] that the plan is to base each sector of control in the stadium of the team, and that the borders of the sectors will be defined by the midpoint between two stadiums. That is, all points in a particular sector would be closer to its base stadium than any other Major League stadium.

I live in Toronto, so it is obvious that I will be living in the new sector of TOR, but what if you are in an area that is near several stadiums? What new sector and which new sector's general manager / overlords should you prepare to swear your allegiance to?

To help, I reached out to cartographer Zara Matheson (@zmatheson) to draw out the new political map of the Empire (click to enlarge): 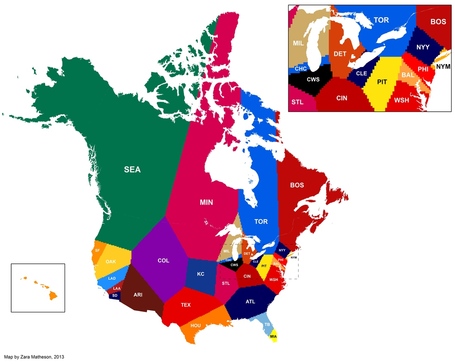 Some other points of interest:

So, if you live in the U.S. or Canada, which sector will you belong to once Emperor Bud completes his plans?

I could've easily written this post as "which MLB stadium are you closest to as the crow flies?" but it would've been much less fun.