Share All sharing options for: GameThread: World Series Game 4 (and a Brief History of Relievers Batting)

Baseball is great. Commentators often say that one of the best parts about the sport is that you can watch the game for decades and decades and there is still a chance you will see something you've never seen before in any given game. And last night we saw a brand new way to end a game, thanks to some very questionable decisions made by the manager of the Boston Red Sox as well as catcher Jarrod Saltalamacchia.

One of the most glaring error was the choice to leave Brandon Workman in the ninth slot of the order and then to let him bat for himself in the ninth inning. The rationale at the time was that the Red Sox wanted more than an inning from Workman, but then once he gave up a single, he got yanked for Koji Uehara.

Relief pitchers don't generally get to bat too often in the World Series (especially since the American League introduced the designated hitter in their parks in 1973). Since the very first one in 1903, a relief pitcher has come up to bat just 389 times, and that has happened just 25 times since 1990. That's probably because relief pitchers are probably some of the worst hitters on the roster, no even getting the regular at bats that starters get in the National League. In those 389 plate appearances, relievers have batted a combined .148/.189/.179, with a single homer.

That single home run was hit by New York Giants reliever Rosy Ryan in the fourth inning of game 3 of the 1924 World Series. He had come in to relieve starter Hugh McQuillan (who somehow got the W despite pitching only 3.2 innings) in the top of the fourth with the bases loaded and the Giants up 3-1. Ryan walked the first batter he faced to make it 3-2, but got out of the inning unscathed. Ryan then came up to plate as the second batter the next half-inning and hit a solo shot off Allen Russell.

Four Blue Jays relievers have batted in the World Series. The first came in a key situation in the top of the eleventh inning in Atlanta in game 6 of the 1992 World Series. In the previous half-inning, manager Cito Gaston replaced Tom Henke with Jimmy Key but did not double switch despite the pitcher's slot coming up as the first batter the next inning. Because Key was a starter and the game was tied 2-2 in extra innings, Gaston thought it would be best to leave Key in to bat so he can get a few innings out of him if the game was going to go long. Just like Workman from last night, Key was to make his first professional plate appearance in a late game situation. Facing Charlie Leibrandt, Key popped up to the large foul territory of Fulton County Stadium after five pitches. Had Dave Winfield not delivered a game- (and World Series-) winning two-run double later that inning, there may have been more discussion about that move, with Derek Bell and Ed Sprague on the bench. Trivia: Key was wearing Manuel Lee's batting helmet during his at bat: 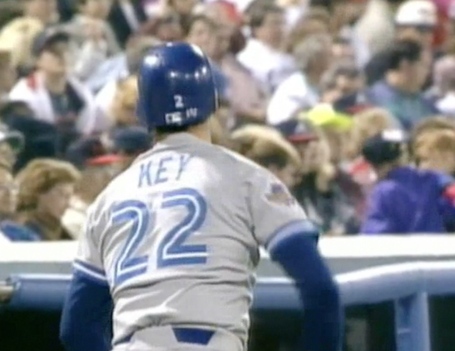 Danny Cox became the next Jays reliever to bat in the World Series during game 3 in 1993. He replaced starter Pat Hentgen in the bottom of the seventh inning and came up to lead off the eighth, but by that time the Blue Jays were already leading 8-2 against the Phillies, so they just needed some innings to be eaten.

The next day saw two Blue Jays relievers come up to the plate, another oddity to add to the general bizarreness of game 4, which ended with Toronto winning 15-14. Starter Todd Stottlemyre only pitched two innings, giving up six runs on three hits and four walks, getting a bloody chin on the way to remind us why the designated hitter rule was invented. Leiter came up to the plate in the fifth inning to face Roger Mason and actually collected a first-pitch double, making him the last reliever to get a base hit in the World Series. The base hit must have rattled Leiter: he gave up five runs in the bottom of the fifth and was replaced by Tony Castillo. Castillo himself came up to bat in the seventh with the Blue Jays down 13-9 and struck out looking.

Tonight we have the Red Sox's Clay Buchholz face off against the Cardinals' Lance Lynn. Buchholz might not be able to give Boston a long outing, so Farrell will likely have to lean heavily on his bullpen.