Not well thought out and quite frivolous.

The Blue Jays, along with the rest of Major League Baseball, will be getting new spring training / batting practice uniforms according to Paul Lukas over at ESPN. Lukas found Majestic's catalogue that sold all 30 teams' new uniforms. The new redesigns are not exactly creative or inspiring--only a keen eye can tell the difference between the current and new versions of the Blue Jays jersey--but they will be good money makers, especially if they're released in time for Christmas. 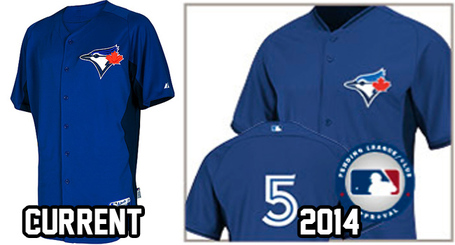 The most obvious change is the new dark blue striping around the collar and around the sleeves, just like last year's All-Star Game jerseys' design. Another change is that the secondary colour on the side has been reduced in size and now only covers the underarm area, presumably to hide sweat stains or something. The Blue Jays will follow their spring training and batting practice tradition of not having player names on the back of the jersey, joining the Yankees, Orioles, Twins, White Sox, Angels, A's, Rockies, Cubs, and Rangers. Even though that makes it harder to identify players (especially newly-signed non-roster invitees) I actually really like the look of the lone white numbers on the blue jerseys.

Interestingly, a few teams, including the Jays, have a "Pending League/Club Approval" stamp on top of the image, which means that there may be small changes before they are officially released.

Fellow Torontonian (well, Toronto-areaian) Chris Creamer was bang-on when he drew up his predictions for the new uniforms back in July. (Also in that article he mentions something about the Pirates possibly changing their logo this offseason.)

Terribly true RT @Minor_Leaguer Good call you guys, also says something about the lack of creativity with the BP uniform designers though

If you recall, towards the end of the Blue Jays' last game of the season this past Sunday, pitcher Esmil Rogers was called on to pinch run at first base for designated hitter Adam Lind. Manager John Gibbons was forced to use Rogers because the 2013 Blue Jays found a way, through a combination of injuries and paternity leaves, to empty their bench despite the September expanded rosters.

Rogers became the seventh Blue Jays pitcher to pinch hit in a regular season game according to a Baseball-Reference Play Index search.

Dave Stieb has the club lead for pinch running appearances among pitchers, partly because of his long tenure and his past as a converted outfielder. Overall, pitchers scored just three out of the 16 times they've pinch ran. The Blue Jays are 2-14 in games when they have to get a pitcher to pinch run, which isn't surprising as it is probably a sign of desperation. Interestingly, the Blue Jays did not have a pitcher pinch run from May 17, 1988 when Stieb did it for the last time, and August 20, 2007 when Dustin McGowan was asked to do so.

In that 2007 game, McGowan came in to pinch run for a lumbering Frank Thomas in the bottom of the 8th. The Blue Jays entered the game trailing 6-1 but the batters started a rally, pulling the score to 6-3 with Thomas's double. John Gibbons picked Dustin McGowan to go in to run, and on the third pitch of the next at bat, McGowan came in to score on a Troy Glaus double. Gibbons told the media after the game that McGowan was the "fastest guy" left on the bench. On the bench were Aaron Hill (who pinch hit later in the inning), Gregg Zaun, Ray Olmedo, Matt Stairs, so I think Gibby made the right choice here. Of course, this all happened before all of McGowan's injuries--I'm sure he won't be allowed to pinch run ever again.

The folks at Stadium Journey did something pretty incredible: they visited every single ballpark in affiliated Minor League Baseball except for the Venezuelan Summer League and the complex rookie leagues. They released the full rankings of the 160 stadiums here, with the top rank going to Pensacola Bayfront Stadium, home of the Blue Wahoos (Reds, AA). It gets top scores for pretty much every single category, and man it just looks gorgeous, like playing baseball in a tropical paradise.

Blue Jays affiliates' stadiums finish all over the board, below they are listed, linked to their full review of the stadium:

Although the ranking is fresh, do note that some of these reviews are up to two years old, so things may have changed for the better (or for the worse) in these ballparks.