John Farrell and the Boston Red Sox are the 2013 World Series Champions, and I'm OK with that

Share All sharing options for: John Farrell and the Boston Red Sox are the 2013 World Series Champions, and I'm OK with that

John Farrell and the Boston Red Sox are the 2013 World Series Champions, and I think I'm OK with that. I'm happy for the Red Sox players, especially a comeback story like John Lackey's. And of course, John McDonald and Brian Butterfield. I'm happy for Red Sox fans--yes, some of them are particularly annoying, but the majority of any fan base is composed of good folks who love the game as much as you and me. I'm happy for Steve Paikin.

Of course, I didn't feel like that right after he left. I was angry, I was spiteful. I was deeply upset and disappointed to learn that Farrell already had his eye on the managerial job in Boston after just one year with the Blue Jays. And I was incensed when he actually left after his second season and talking about finally getting his "dream job" and his sarcastic reminder to the Toronto media that he was traded to Boston. I had great fun over the offseason, seeing all the moves that the Blue Jays made to improve their club. I was one of the fans who booed John Farrell when he came back to Toronto on Friday, April 5. Many of us were.

But then the Jays lost--Emilio Bonifacio made three errors and struck out four times. Then later that weekend, the eventual World Champions whooped the Jays 13-0. Of course, things just went downhill from there: the Blue Jays kept on losing and the Red Sox kept on winning. When it became clear that the Blue Jays were not in playoff contention, my focus turned towards the Red Sox. During the entire postseason I was focused on them losing. I didn't care who won, I didn't care how they won, I just wanted to see the Red Sox, their stupid beards, and most importantly, John Farrell lose. I hated every time Fox would cut to his face.

Then I realized that this whole way of thinking was wrong and that I had became someone who I didn't like. I became a fan who revelled in the sadness of John Farrell. And I was feeling that partly out of jealousy of his ball club's success, partly out of frustration from our ball club's failure, partly out of the embarrassment of our collective cockiness at the beginning of the season, thinking that the Jays were destined to win, and partly out of fear that John Farrell would get the last laugh. 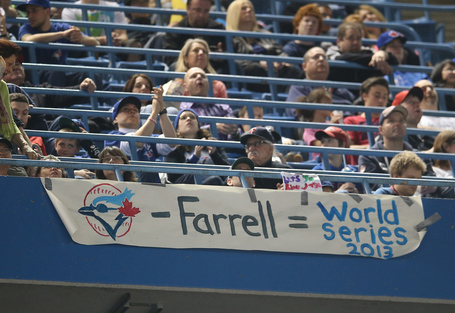 Having gone through that self-reflection some time between games four and five of the World Series, I've finally let go of the Farrell obsession--something that I should've done a long time ago. Mind you, I still hate the Red Sox and their stupid beards and I hope their fans will watch the Blue Jays celebrate in 2014, but it's no longer personal.

I still disagree with the way he left Toronto, but in the end he was a person who didn't like where he was, didn't get along too well with his boss, and just came out of a very tough season both on and off the field. Then an opportunity to go back "home" to a city that loves him and to start fresh came about. I don't think I can blame him for chasing his dreams and doing what he thought was best. It wasn't like he jumped ship to a contender: he left Toronto for a dysfunctional 69-93 Red Sox club.

I now can be happy for John Farrell as a man who has achieved the pinnacle of success in his field, accomplishing a lifelong career goal. He made a lot of strategic mistakes this year, but he did learn a lot from the ones he made the past two years with the Blue Jays and became a better manager after his tenure in Toronto. There are no stats to back it up, but it seemed that he maintained control over his clubhouse and that he was well liked by his players. He was probably a better manager this year than he was in 2011 or 2012. Good for him.

Now the season is over and the Red Sox have won the title. If nothing else, I hope that it has brought closure for you and are allowing you to move on from the sadness of the 2013 season and look forward to what 2014 might bring us.