The right fielder poll was one of the more interesting ones, we've had a few good right fielders, but Jose Bautista took 50% of the vote. Joe Carter was 2nd at 20%, off the value of one swing, which is fair. Jesse Barfield had 17% and Shawn Green 10. Raul Mondesi, Junior Felix (???) and Alex Rios each got a few votes, as well as a vote for 'someone else', which confuses me because I'm sure I listed everyone that played a decent number of games for the Blue Jays.

On to DH. I put Edwin into the first base poll, Lind I'll put into this one. We haven't had any real long term DHes.

I have a bit of affection for the first three on the list, Rico Carty and Otto Velez had kind of a limited value, but then could occasionally hit one out of the park. Carty was at the end of a pretty long career, Velez just seemed older than he was. Velez had a great slash line in 1979, .288/.396/.529, he knew how to take a walk. And Cliff Johnson split time at DH with Al Oliver, the first time the Blue Jays made the playoffs. He had an awesome mustache too: 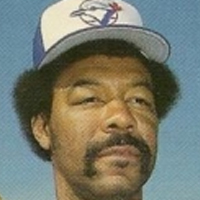