Phillies interested in Jose Bautista, Domonic Brown "plus" as return to Blue Jays

Share All sharing options for: Phillies interested in Jose Bautista, Domonic Brown "plus" as return to Blue Jays

Late Tuesday evening, Philadelphia-based sports guy Howard Eskin went on the evening news to break the news that the Phillies were working on a "major trade." After his TV appearance, Eskin tweeted out that the trade involves Blue Jays outfielder Jose Bautista, who will go to the City of Brotherly Love in exchange for outfielder Domonic Brown "plus" something, most probably pitching, one would think.

Jose Batista fits 4 #phillies. Under contract for 2 more yrs. Phils would have more balance from right side also after signing Marlon Byrd 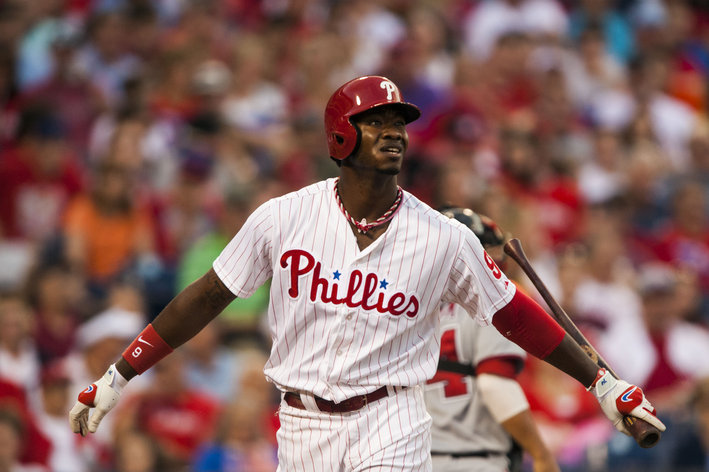 Domonic Brown, 25, was coveted by Alex Anthopoulos all the way back in 2009 when he was trying to trade Roy Halladay. He finally found what Anthopoulos saw in him this season, batting .272/.324/.494 with 27 homers and 21 doubles and earning an All-Star selection along the way. But of course, this was someone who wasn't able to stick around the big leagues for any length of time prior to 2013, so him as the centre piece of the trade of the Blue Jays' franchise player makes absolutely no sense to me.

I'm not trying to say that Eskin is making this up, but he skilfully adds the word "plus" at the end without specifying more. That lets us think that this is perhaps something that resembles a deal that Ruben Amaro and Alex Anthopoulos could be hashing out right now in a hotel room at the GM meetings. Plus who? Cliff Lee? Cole Hamels? Chase Utley? Ben Revere?

Something about this feels ridiculous so my gut told me to pretty pass it off as an ignorable rumours but my mind told me that it would be a good way to push out a quick post and have you folks discuss about it.

Source: #BlueJays on verge of acquiring Josh Johnson from #Marlins. Deal could be even larger than that.

According to Eskin, who went on Sportsnet 590 the Fan after his tweets, Jose Bautista was not happy with his contract making just $14 million when compared to everyone the Blue Jays acquired last year. Of course, a trade to the Phillies would make him feel much better, with Ryan Howard making $25 million and Chase Utley making $15 million...

I am now going to bed, fully expecting that a press conference is going to be called to announce the trade Wednesday morning. But just one more update.

#BlueJays have largely been in information gathering mode here. This could be a concept that was floated.

Over at Drunk Jays Fans, Andrew Stoeten gives the trade rumour a few good thoughts, rationalizing the deal as a potential salary dump for the Blue Jays (perhaps to open up payroll for a starting pitcher). Some good thoughts there, but I still don't see why the Phillies would want to part with Brown plus any significant pitcher in order to acquire Bautista, and on the other hand I don't see how the Blue Jays could trade Bautista for Brown without one. I just don't see how things fit. Maybe a night's sleep would clear my head on this.

So before nonsensical Jose Bautista to Phillies for Dominic Brown rumour gets built up any more, there's no validity to it. None. #BlueJays

just to clear something up, #blueJays arent trading jose bautista for dom brown. not even close.

Howard Eskin went on TSN Radio this morning to talk about the rumour he started. Now he's saying that nothing will happen until the Winter Meetings, or January. Eskin is claiming that Bautista will try to get a "contract bump" with the Phillies (even though he says right after that the Phillies probably wouldn't want to do that). Also talked about the importance of Bautista being able to play third space. Also said, "I don't know what happened, but his home runs have dropped the last two years." (Hint: games played)

UPDATE 5 (This better be the last one dammit)