This is news that will sadden many Blue Jays fans: Mike McCoy is now a member of the Boston Red Sox family, after signing a minor-league contract with them, according to Matt Eddy of Baseball America.

McCoy played parts of three seasons with the Blue Jays from 2010 to 2012, splitting time with the Jays' former AAA affiliate Las Vegas 51s, and he spent the entire 2013 season with triple-A Buffalo. He was a replacement-level superutility player with the Jays who hit .193/.276/.260 with 16 extra-base hits (three homers, 13 doubles) in 374 major league plate appearances. He was OK on the field but I never saw anything special from him.

So, good bye, Mike. All the best in Boston. You didn't play all that much in Toronto but you were still very special to us for many reasons.

In 2011, Mike McCoy started the season with Toronto but was subsequently was optioned six times to Las Vegas and recalled six times back to the big club. He travelled 21,607 miles on flights associated with being optioned and recalled alone. By late April, I was so fascinated with his travels that I began to document every flight he took and reported it on Bluebird Banter. 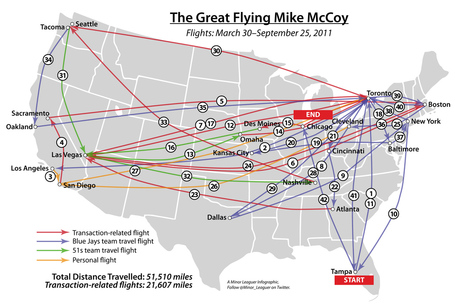 He would end up flying at least 51,530 miles during the 2011 season, taking at least 42 separate flights. That's double the distance around the Earth at the Equator. As a comparison, if he had stayed with the big club for the entire season, he would've travelled around 32,803 miles. I wonder what the record is for the most miles travelled in a single season by a professional player in affiliated baseball.

The distance between Toronto and Las Vegas (1940 miles) and the distances between cities in the Pacific Coast League (a misnomer: it stretches from Tacoma to Nashville, a distance of 1977 miles) really inflated his air mileage. These two factors, along with the unusual number of times he was shuttled to and from the minors that season, produced a potentially record-setting travel distance for an otherwise unremarkable player. Since the New York Mets (the current parent club of the 51s) are about 300 miles further away from Las Vegas, there is a chance that someone in their organization could break McCoy's record.

In spring training in 2012, the now-retired Chris Woodward (#25) was nice enough to agree to hand a printed copy of the map (circled) to Mike McCoy (arrow), who took a brief look at it and smiled a little--at least it didn't seem like he was insulted. I don't know what he did with it after that. I hope that it was at least recycled. Unfortunately, I did not get a chance to ask McCoy about it when he was with the Bisons this season. 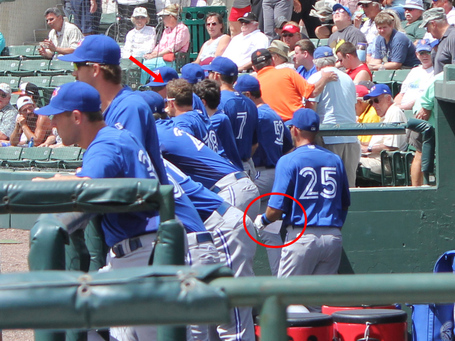 McCoy played every eight different positions with the Blue Jays, joining Bob Bailor as the only Blue Jays to reach that feat, appearing in:

McCoy is now joining the Red Sox, the team against whom he tossed a perfect inning in his sole Major League appearance as a pitcher during a 16-4 blowout. He became the fifth non-pitcher to take the mound for the Blue Jays (after Craig Kusick, Bob Bailor, Rick Leach, and Frank Menechino). You can watch McCoy induce three whiffs here, and his payoff pitches below (warning: footage contains Corey Patterson and Jayson Nix):

Mike McCoy (@mhmccoy10) does not use Twitter that often, but when he does, he usually brags about his score in the game Banana Kong.

Please let me know in the comments if you know who created this GIF. I found it via Captain Latte's tumblr.

Footnotes on the flight distances

Since I wasn't able to obtain a confirmation from the Blue Jays, I had to make a few assumptions. Whenever I could, I would use the exact distance of each Blue Jays charter flight (flight logs were found on FlightAware), but most of the flight distances used the "as the crow flies" distance between two airports. All recall and option flights, which would be taken on commercial aircraft, were assumed to be direct flights except for the flights from Omaha to Toronto and from Toronto to Des Moines, both of which were most likely routed via Chicago. Some newspaper or online articles that have featured an interview with Mike McCoy revealed when he flew back home to San Diego during the season. If the 51s were travelling immediately (1-2 days) after he was optioned, and if he did not appear in the 51s boxscore during those days, I would assume that he travelled directly to the ultimate destination.