Major league rosters are constructed from a combination of players from drafts, free agency, trades, and waivers. Typical rosters just list where each player is but not where they came from and how the sequence of moves that were needed for the team to acquire them. I have been interested in the lineage of various Blue Jays players, and recently masterkembo posted a comment on how the recently-retired Chris Carpenter became a Blue Jay, and managed to trace a direct lineage all the way back to Al Woods, who was drafted in 15th round of the 1976 expansion draft.

Ann Frazier, the editor of fellow SB Nation blog Fear The Fin developed a "roster tree," similar to a family tree, to visualize the lineage of the San Jose Sharks back in 2010. I modified her design into a typical rapid transit route map for the Blue Jays 40-man roster. The current roster is displayed as the blue loop line, and each current player is linked to a predecessor (if they have one) via a different transit line. 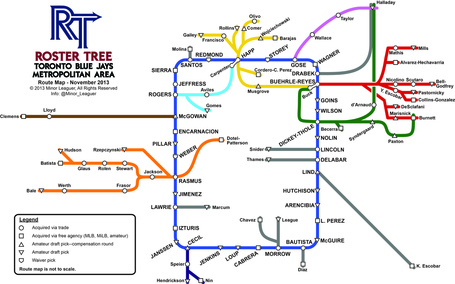 Here are some notes about the roster tree / route map:

For future versions, I am looking for some creative names for the different coloured lines, so do make suggestions in the comments. I have one for the blue line: the "Aaron Loop".