With the calendar having turned to November, the hot stove season is in full gear. For most, this means visions of free agents to fill holes and blockbuster trades. But it also means that the Rule 5 draft is a month away, and the deadline for protecting players from the Rule 5 draft is looming (November 20). It's also a good time to take stock of the organizational depth chart to think about prospects coming through the system, and what type of flexibility might be needed in the future. To that end, the last couple years I've put together a post looking at the organization depth chart and Rule 5 eligibility. e&n4e has put together a series of posts the last month examining this, which somewhat of not largely obviates the need for me to do so, but there's been good feedback the past couple years I think there's still some use in putting it together as a resource.

As I did last year, I've tried to add more useful information. In addition to details about the player and how they were acquired (directly relevant to Rule 5) and the signing bonus they received to provide context about how they were valued, this year I've added the level(s) at which each player has played in the Jays' system from 2011 to 2013 per a request last year. This was largely done using data quickly and easily pulled from Baseball-Reference, and so it only covers time spent with the Jays' affiliates. For players with three or more levels, I've only included the most significant two. In addition, I've included an update of the framework on options and outrights for Blue Jay players that I previously had posted. I think it makes sense to include it here, though I'll probably post another update around Spring Training once minor league free agent signing are complete.

As a brief primer, the Rule 5 draft was designed to prevent teams from stockpiling talent in their minor league systems without giving them a shot at the majors. For $50,000, a team can claim an eligible player not on his team's 40-man (MLB) roster, but they have to keep him on their 25-man (active roster) for the entire next season or offer him back to his original team. In general, players under 19 are Rule 5 eligible four years after signing, and players over 19 are eligible 3 years after signing. So, with some exceptions, high school players and international free agents (IFAs) drafted in 2009 or before are eligible this year, as are college players drafted in 2010 or earlier. I did a much more detailed summary last year, it is linked below.

Below are the charts breaking up players by the year of their first Rule 5 eligibility. Below that is some commentary and how I see things happening, as well as some changes from last year (including one affecting IFAs), and some scattered facts. For 2013, players highlighted in yellow are those I believe merit protect and in blue may attract some interest from other teams if left unprotected. For future years, yellow highlighting indicates I believe the player is a consideration to be added to the 40-man. 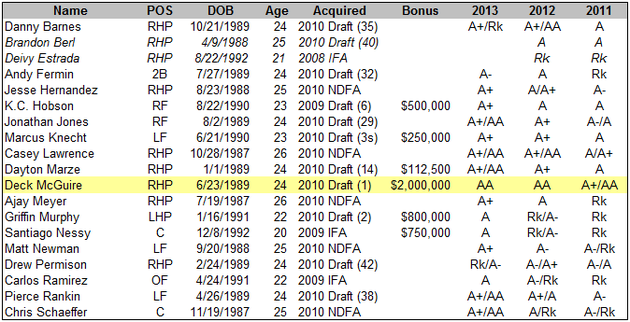 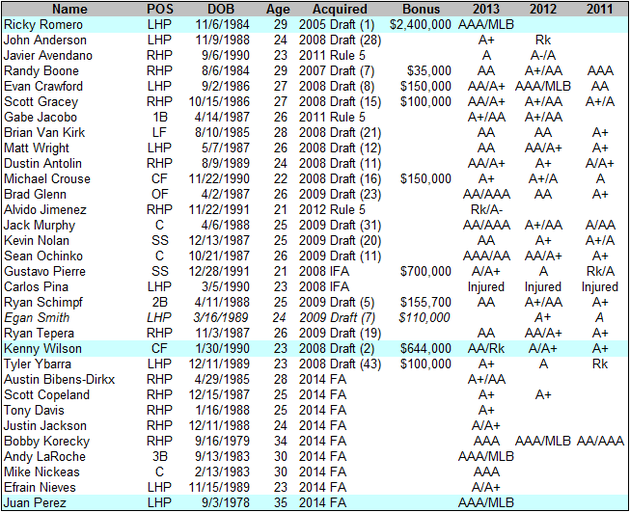 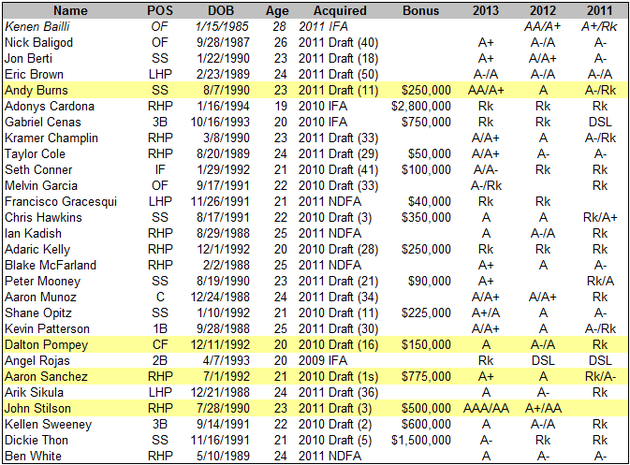 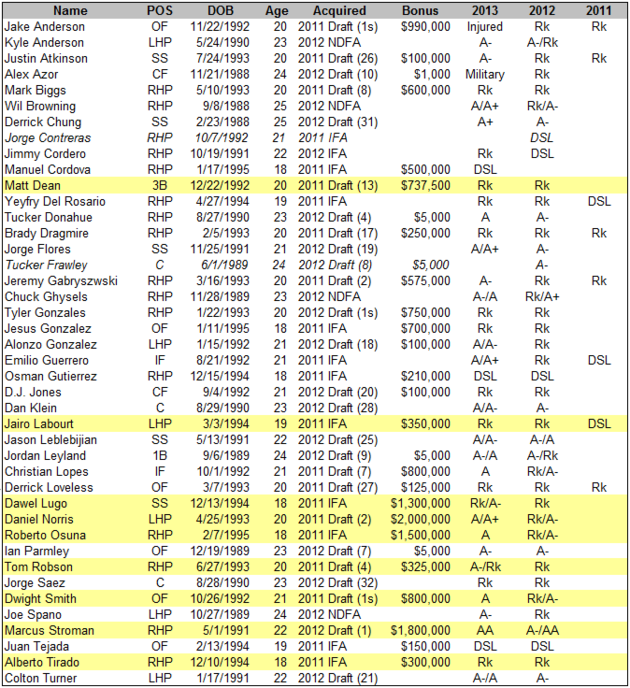 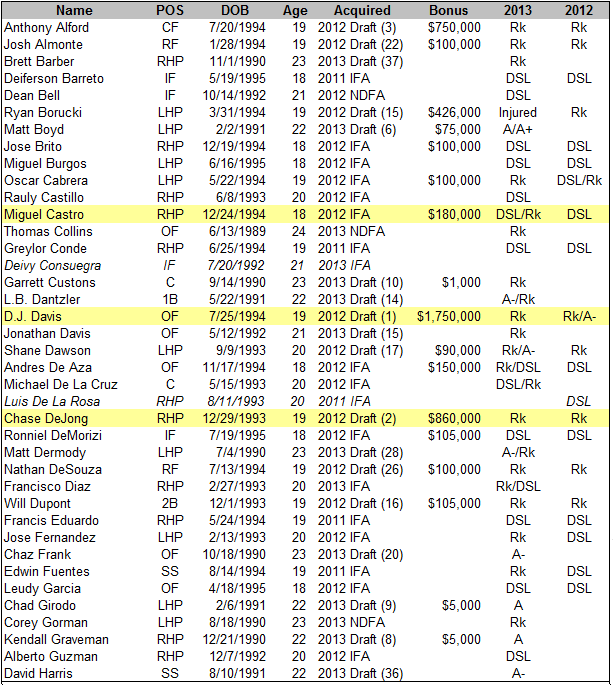 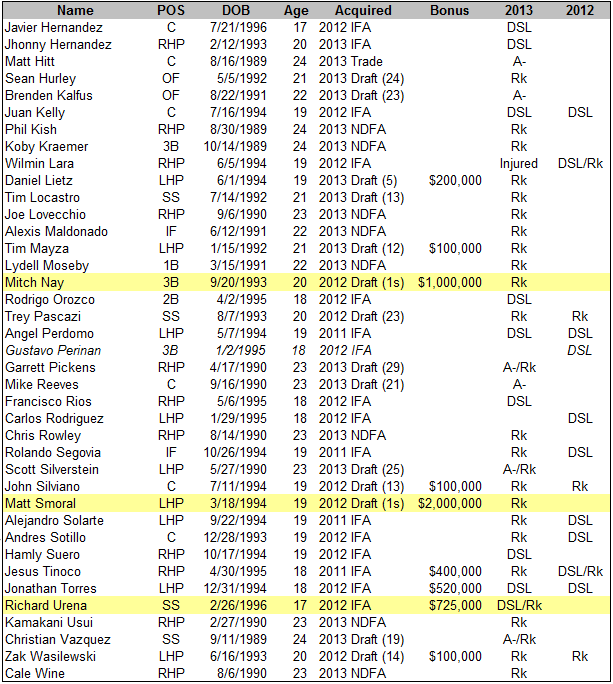 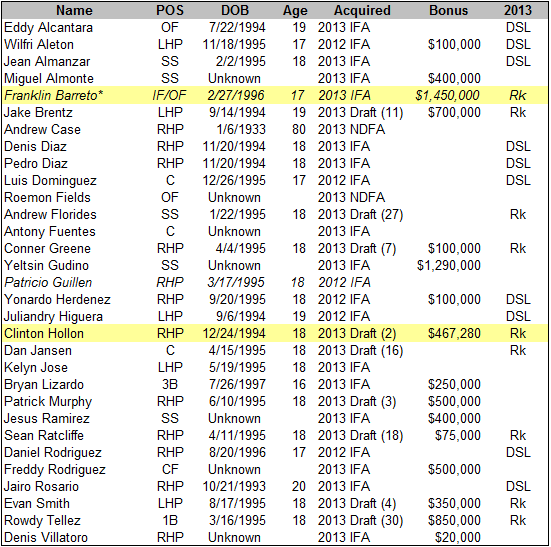 *The only signing date for Barretto is the 6/2013 date listed by the Jays on their transaction page. However, he was part of the 2012 July 2 signing class and if his signing is consistent with others in that class, he will be Rule 5 eligible in 2016 (see below)

Thoughts on 2013 Rule 5 Protection and Beyond

The Jays currently have 38 players on the 40 man, which leaves little flexibility to protect additional players without removing others. As it turns out, that's not really an issue since there's not really many players meriting protection this year. In terms of first time eligibles, I'd expect only Deck McGuire to be protected. Kenny Wilson has been the subject of some speculation, but I don't see it. In the recent past, Danny Barnes and Santiago Nessy would have been considered candidates, but beyond their merits would be likely difficult to keep on a MLB roster and are therefore unlikely to be chosen anyway.

In terms of previously eligible players, there's not really anyone to protect either. Ricky Romero is eligible to be taken (and technically this is his first time subject to Rule 5 since he would was protected in 2008), but at this point he's already been through waivers twice so he's almost certainly not going anywhere. Any minor league free agent is technically available, so the likes of Juan Perez and Mike Nickeas are eligible to be poached. Perez I suppose could be taken if a team had a bunch of spots and really liked him, but if there was that kind of interest why re-sign with the Jays on a minor league deal.

Looking forward to 2014, the prime candidates for protection are Andy Burns, Aaron Sanchez and John Stilson, though I'd expect at least one of Burns and Stilson to force their way on the 40-man before next November. Other possibilities who could make a push in my view include Dalton Pompey, Shane Opitz and Jon Berti though the latter two in particular are longshots. 2015 is really far off, but there's a multitude of names that will be 40-man factors if not already on, headlined by Stroman, Norris, Osuna.

Notes on the Lists and Changes from Last Year 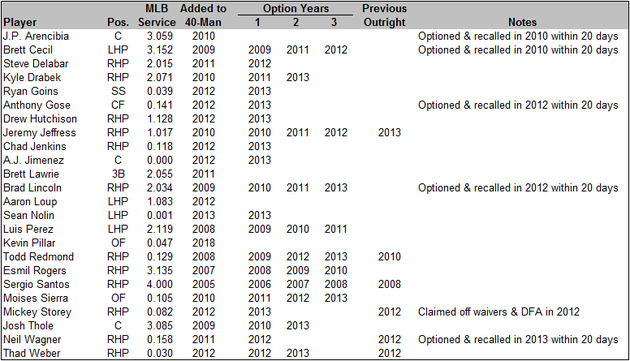 There are 22 players currently on the 40-man roster who would be locked into the 25-man come Opening Day, before any additions through free agency. Beyond the possibility of needing 40-man spots this winter, it seems unlikely the Jays can carry all these players next season. I would look for the Jays to try and sneak the likes of Luis Perez, Lincoln, and one of Redmond/Rogers through waivers (or trade them).

This only includes players with previous time on a 40-Man roster, as any player who has not spent time on the 40-Man roster will have a full complement of options