With snow and ice coating every surface outside my windows, and Tom being in the Dominican, it's perfect time to dream about the summer, baseball, and of course, baseball trips. I am a relative latecomer to the whole concept of travelling to another city to watch baseball--some of my friends are not only non-baseball fans, but they actually despise it, so despite having gone on many road trips throughout the United States, I only got to see two baseball games outside of Toronto (a Reds-Pirates game at PNC, and an Astros-Brewers game at Miller Park) until the past couple of years.

In 2012, TFSML and I went down to Dunedin for Blue Jays spring training (see TFSML's recaps: part I, part II), as well as games in Lakeland and Sarasota. As TFSML wrote in the post, Ed Smith Stadium (spring home of the Orioles) was gorgeous and really made me realize how big of a dump Florida Auto Exchange Stadium was (and is). Give TFSML credit for his scouting report on Yan Gomes. I also made my only (known) appearance on Sportsnet during that trip, playing the role of a fuzzy white patch wearing a red (Vancouver Canadians) cap: 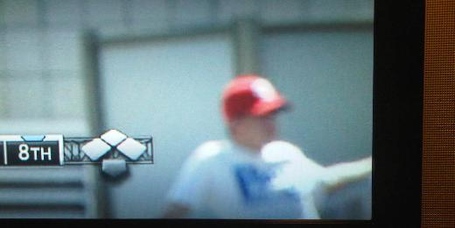 We had a great time and I'll definitely need to return another spring one of these days before the Blue Jays leave Dunedin. I'll also use this opportunity to peddle TFSML's Bluebird Banter t-shirt.

The only significant problem I had during that trip was my flight back home (TFSML got home fine). I flew Delta, and the plan was to go from Tampa to Cincinnati back to Toronto; however they overbooked the second flight and I was stuck in the Cincy airport for five hours and had to stop again in Detroit before heading back home. The good thing is that the Cincinnati airport had great WiFi and cubicles for working, so I got a post and some "real" work done, and collected a cool $600 in Delta credits for the hassle. So this spring, days before the credits expired, I used the $600 to fly to San Francisco to see a friend and catch an Athletics-Giants pre-season game at beautiful AT&T Park. They had extra bobbleheads somewhere and handed a random one to everyone at the gate. I originally got a Robb Nen, but traded it for a diving and bubble-gum-blowing Pablo Sandoval. 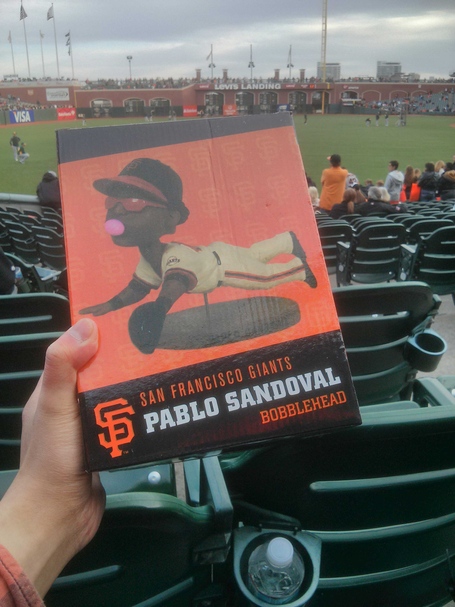 It got cold towards the end of the game and I was too cheap to pay $7 for a cup of Ghirardelli hot chocolate so I settled with just shivering, which was free. The next out-of-town game I saw was a Buffalo Bisons game at Coca-Cola Field in late April. Coca-Cola Field was a great ballpark but we froze our butts off during the double-header. Game one started around 1 pm and we were there all the way until the end of game two (around 6:30 pm)--and were very appreciative to the guy who decided that minor league double-headers should be only seven innings each. By the end of game two, there were just 80-some fans left at the park, which normally seats 18,000. It was so quiet by the end that we heard the sounds of the metal ad panels turning. After that game, I returned to Buffalo for numerous games in the summer and it was amazing--I highly encourage those in the area to give Coca-Cola Field a try. 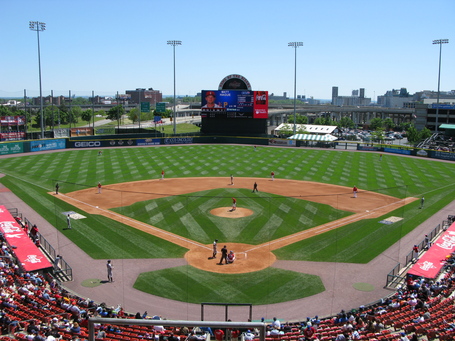 Next, piggybacking on a work trip to Florida, I went down to Miami to see a Marlins game at their new ballpark. We were able to pay a scalper $5 (for $1 face value tickets) to get into the ballpark and pretty much got to sit wherever we wanted: 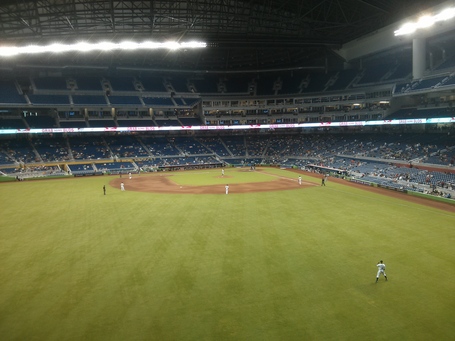 Officially, the attendance was 13,110 but I doubt if there were more than 5,000 people there. In the eighth I went out to the outfield to take a good, close look at the home run sculpture and was lucky enough to witness it go off up close when Giancarlo Stanton hit a go-ahead (and later game-winning) home run. I am the guy wearing the dark shirt above the 427 sign in this video. 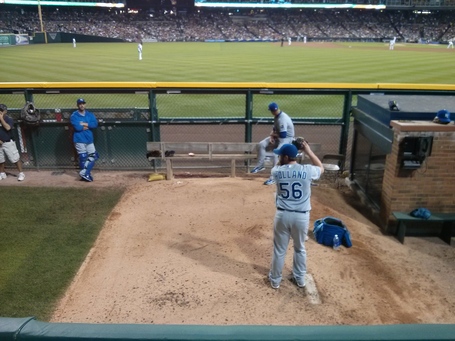 Then, in mid-August, a friend and I drove down to Detroit to go see a recently-traded Emilio Bonifacio wear a Royals uniform. Our seats were pretty much right on top of the Royals bullpen, and the Tigers fans near us had a good time heckling the relievers. We really enjoyed the beer selection at the park, and we even got a nice fireworks show after. On the same trip we drove down to Lansing for a Lugnuts game at Cooley Law School Stadium. Lansing is a really nice little town with a fantastic peanut shop right downtown (people who are allergic, alert). The ballpark is nice and intimate, with a fantastic beer and food selection. The Voices of the Lugnuts, Jesse Goldberg-Strassler and Slavko Bekovic, were super nice guides, and we got to see some young kids in action.

In 2014, I already have plans to go to Montreal for the Blue Jays-Mets games in Olympic Stadium in late March (get your tickets here), and hope to go to Manchester to see the New Hampshire Fisher Cats and then down to Boston for a Red Sox game there.

All photographs copyright Minor Leaguer, all rights reserved. Use only with permission.