Sergio Santos Or Casey Janssen: Does It Matter Who Closes For The Blue Jays?

Should the Blue Jays have a defined closer on the team or should the situation decide which pitcher is used?

Share All sharing options for: Sergio Santos Or Casey Janssen: Does It Matter Who Closes For The Blue Jays?

A fair bit of talk this spring has been about who has the inside track for the closer's role. With Casey Janssen injured and his status for the opener against the Indians unclear, it would seem Sergio Santos will be considered the team's closer for at least the first few weeks of April. It should be noted that Santos has a bit of soreness as well, but it doesn't seem to be a big deal. While either pitcher would likely do a fine job in the overrated closer role, could the Blue Jays resort to using "situational closers" for the 2013 season? Janssen and Santos bring different styles to the team and slotting them directly into the eight or ninth inning likely isn't the most effective way to use them. This is especially relevant after Ernie Whitt reinforced the Canadian stereotype of being polite by giving the Americans the win in the World Baseball Classic through his awful bullpen management. 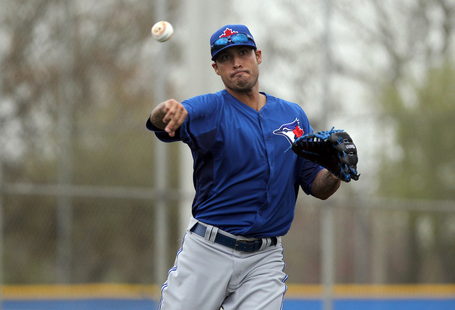 We're all aware of Santos' history with the Jays so far. After playing six games last season he was shut down with shoulder pain, which eventually led to surgery. Hopefully Santos lives up to the fanfare that came with his arrival in Toronto, stemming from his reputation as a possible shut down ninth inning option. Santos' tight slider is his best pitch and usually where his gets his strikeouts from. The downside of his wicked slider is that it is often in the dirt (especially against right handers). This heat map (catcher perspective) from 2011 courtesy of Fangraphs illustrates this: 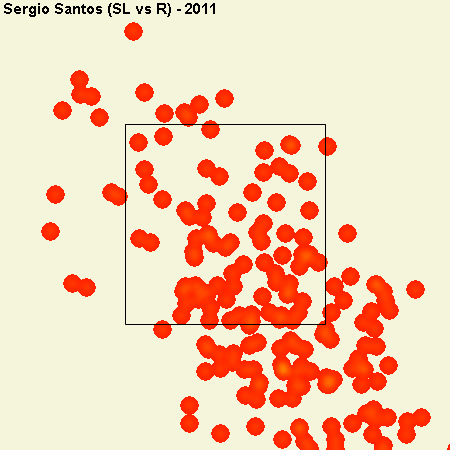 In positions where there are runners on, sliders in the dirt are not ideal (especially with J.P. Arencibia behind the plate). Personally, I believe Santos would be optimized with empty bases and in situations where a walk would not be a dagger. This is reinforced by his history of high walk rates. In 2011 he walked 4.12 per 9 innings. In that season, almost 50% of all his batters faced resulted in either strikeouts (35.4%) or walks (11.2%). If he comes into a game with a clean slate, Santos should be able to work around his wildness and get three outs. These numbers would suggest that using Santos as a high leverage reliever against the middle of the order for 4 or 5 out saves with runners on would probably be less ideal. Which brings us to our other man for the job, Casey Janssen. 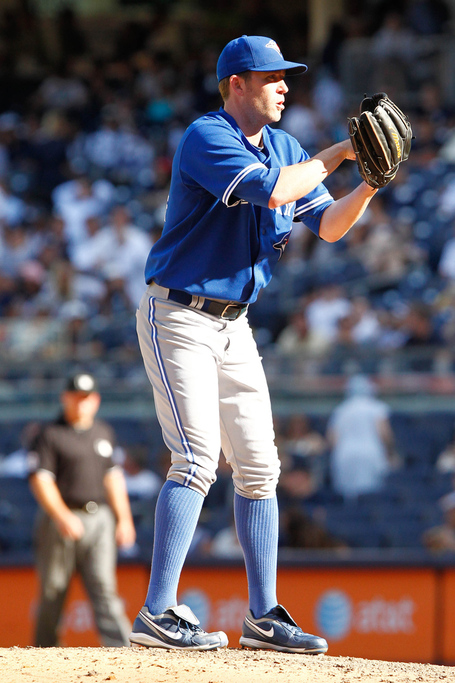 Casey Janssen has been with the Blue Jays since he was drafted in 2004 and finally got his big chance to shine last year. Thrust into the closer's role with Santos' injury, he pitched fantastically ending with a 2.54 ERA in 63.2 innings. He also racked up 22 saves (if saves are what you're into). Janssen is a very different pitcher from Santos, which should be an advantage for the Jays if used correctly. Casey has superior control and it shows in his walk rate from 2012, which was 1.55 BB/9. Janssen has a solid strikeout rate of 9.47 K/9 but it seems that Santos has more swing and miss stuff. With another heat map, you can see just how much Casey pounds the strike zone: 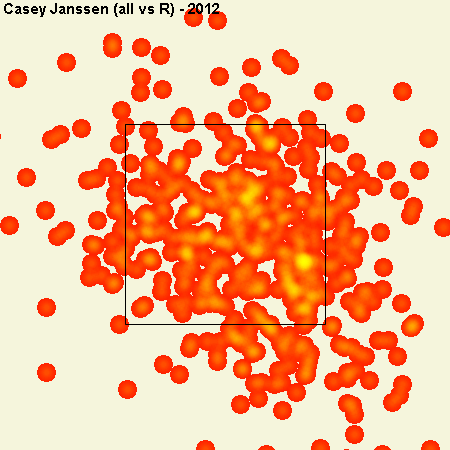 You can easily see that Janssen is much more around the zone than Santos and would be better served as the man to come in when the setup guys have put the team in a jam. He can be counted on to force the batter to beat him more so than Santos, who is prone to giving away free bases.

Another interesting thing to note is that Janssen was much better against lefties in 2011 and 2012. Looking at the numbers, Janssen seemed to induce a large amount of ground-balls with his hard stuff against LHB leading to only a .226 OBP against him. If this trend continues, Janssen would be the better man to turn to when a string of lefties was coming up or especially if a double play was ever needed against a LHB.

Is a closer role needed?

I'm not sure about other Jays fans, but I dream that Alex Anthopoulos and his staff look at the numbers and realize that assigning concrete bullpen roles may not be the best idea for the 2013 season. Toronto has the privilege of having two great pitchers at the back end of the bullpen and not optimizing their strengths would be a shame in a year where every win is going to be very important. Sergio Santos would be best used in situations with a cushion where walks and bouts of wildness would not cost the teams runs. These situations would most likely arise in the ninth going for a traditional save. I'd even argue that Santos would be best used when defending leads greater than one run. In just six games last year, Santos blew a couple of saves where he came in protecting a one run lead. He could also be used as a setup guy in the eighth, granted that if he pitched himself into trouble, Janssen could come in for a four- or five-out save.

On the flip side, Mr. "Reliable" Janssen should be used when strikes need to be thrown and there is a smaller margin for error. Hopefully manager John Gibbons is aware enough to use Janssen whenever there is a high leverage situation late in the game whether it be the 7th, 8th, or 9th inning. He proved last year he could come in and shut down the other team by pounding the zone and not getting wild. His splits could also be utilized by putting him in against lefties to try and induce weak contact late in the game.