Many spots in the bullpen remain open as the Blue Jays prepare for the 2013 season. Let's take a look at the relievers seeking to start the season in the major leagues.

Share All sharing options for: The Blue Jays' Bullpen and Splits - Taking a Different Look at Things

With the Blue Jays' roster mostly set going in to 2013, few battles for roster spots remain. Henry Blanco seems to be set to begin the year as backup catcher at the major league level, with Josh Thole looking at playing in AAA Buffalo.

Currently, the only real positional battle seems to be between Emilio Bonifacio and Maicer Izturis, as they fight for the opening at second base. However, even that battle may not have an immediate victor, as John Gibbons recently announced that Bonifacio and Izturis may in fact just split time at second.

The real fight for roster spots right now appears to be in the bullpen. Alex Anthopoulos did say that he expects both Casey Janssen and Sergio Santos to be ready for opening day, but as they each recover from shoulder surgery, their status for April 2 remains uncertain.

Other bullpen hopefuls such as Brett Cecil, Jeremy Jeffress, and Esmil Rogers (and Santos) are out of options, which means that if they don't make the 25-man roster, the Blue Jays would risk losing those players by attempting to send them to the minors.

Let's look at the pitchers who are competing for the opening day job, as well as guys who could find their way in to the ‘pen at some point this year. Since we'll be looking at major league stats here, players with no or very little major league experience are excluded.

From here, we can get a single metric for determining FIP platoon split, where a positive number indicated that a pitcher is better against righties.

Let's look at this in another way. Let's ignore wOBA for now and focus on FIP and fWAR. Since we are dealing with relievers here (and since there are so many variations in innings pitched), it would make sense to even the field a bit. Instead of total fWAR, let's look at fWAR per 50 IP (all I did was divide fWAR by IP then multiply by 50). Here's what that looks like, measured against FIP difference. Remember that the farther away a player is from the x-axis, the more extreme his split. Normal splits get a positive value, reverse splits get a negative value. 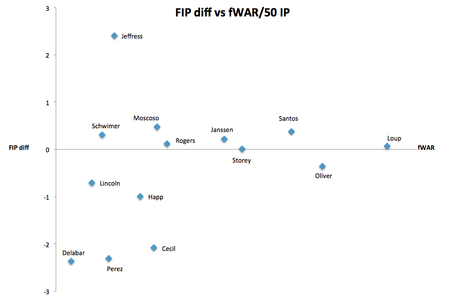 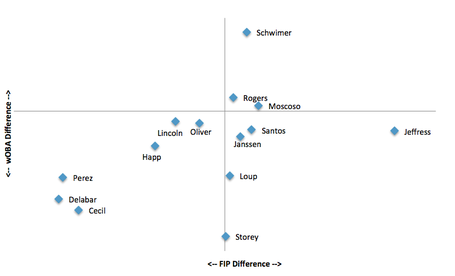 Let's organize players in terms of how they fare vs different handed batters, based on a combination of both graphs:

While this data is still useful, it doesn't really tell us much about how well the pitcher actually performs overall. Let's get the pitchers' actual FIP, ordered lowest-to-highest. 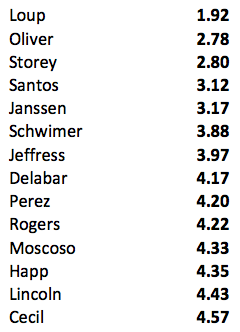 With overall FIP, FIP difference, wOBA difference, and fWAR/50IP, I think we have enough to be able to finally make a prediction for the 2013 bullpen.

The hope here is that Steve Delabar can continue to get better vs righties to be a reliable middle reliever, and that Brett Cecil can be effective against lefties as a LOOGY. One would hope that Luis Perez could return in July and continue to be the reliable reliever that he has been for the past year plus.

There are many other players I would have liked to include in the bullpen, namely Esmil Rogers and Mickey Storey, but I'm just not quite sold, and I'm not so sure the Blue Jays are either. Regardless, there are decisions to be made, and players without options are most likely going to have to be exposed to other teams.

Special thanks to Blake Murphy (@BlakeMurphyODC) for helping with this post.