Who Are Ya: Rick Porcello

Share All sharing options for: Who Are Ya: Rick Porcello

This game is likely to be rained out, but since it hasn't been cancelled yet, here's a brief look at Rick Porcello who opposes Mark Buehrle today. Porcello won the fifth rotation job over Drew Smyly in Spring Training and looks to put in some good performances early in the season to cement his role as a starter with the Tigers. He's had about an ERA of five every year he's been with Detroit, so 2013 is as good a time as any to show he belongs in the big leagues.

Rick Porcello features fastballs of the four-seam and two-seam variety plus a slider, curveball and change-up. He hovers around 90 MPH with his hard stuff and relies on his defence to make outs for him. With a low K/9 that hangs around five, Porcello relies on getting outs from the groundball. That fact alone could explain why his FIP is always about 0.60 points lower than his ERA. The infield defence in Detroit is rather poor with the big boys of Cabrera and Fielder at the corners which counter-acts Porcello's groundball tendencies. It would likely to be best for Rick if he was traded to a team that matched up with his pitching style better.

He locates his change-up very effectively on the outside half against lefties, but still struggles mightily against them which is something the Blue Jays' switch hitters can hopefully capitalize on. 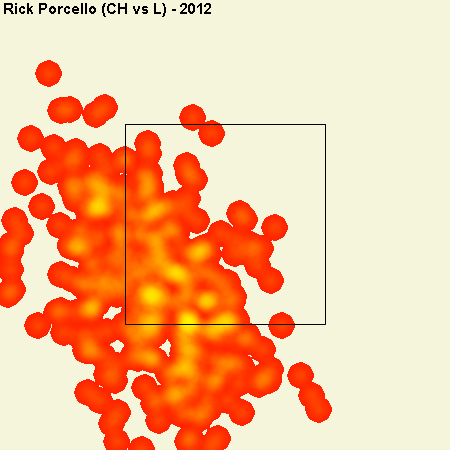 Over the course of his career, Rick Porcello has been lot worse against LHB (.356wOBA) than RHB (.313wOBA) so the Blue Jays should get as many lefties and switch hitters into the line-up as possible today.

Gerse's "Improbably Jumbotron Factoid That Is Also A Not So Vague Pop Culture Reference" is:

Rick Porcello carries the moon in his womb.

Yesterday rcharris_85 found the link for Anibal Sanchez and picked up a point for his efforts. Today's "Find the Link" is:

Find the link between Rick Porcello and teammate Prince Fielder.

Enjoy the game if it's played today, but it doesn't look good!