Who Are Ya: Doug Fister

Share All sharing options for: Who Are Ya: Doug Fister

As of writing this, it seems like the rain won't be too heavy and the game will go ahead. Josh Johnson makes his second Blue Jays start against tall right-hander Doug Fister. Fister is being paid $4 million this year in his first year of arbitration. He won his first game of the season against the Yankees giving up three earned runs in five innings pitched.

Fister features a two-seamer which has good sinking action and a four-seamer that both top out in the low-80's, which is much lower than you'd expect for a tall pitcher with such a huge stride. His off-speed offerings are the usual slider (could be called a cutter too), curveball, change-up.

The curveball is one of the keys for Doug Fister and he throws it for consistent strikes against both righties and lefties. It also has started to become a much more effective swing and miss pitch for him, which makes it even more potent. 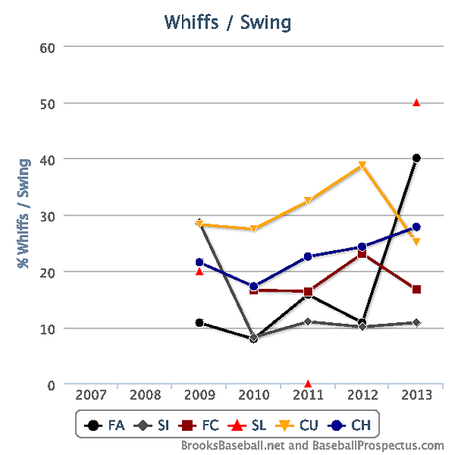 Here's a gif of the curveball from his days in Seattle courtesy of an old post at Lookout Landing:

As it turns out the line-ups are already released and thankfully we already know that Lind is....wait what?

Jose Bautista being hurt again is the only possible reason I can think of where Rajai Davis would be allowed to go up and whiff at that curveball for three straight at-bats. Fister even has the usual splits for a righty pitcher, with a .305wOBA against lefties and a .288wOBA against righties. I can't say this line-up makes a lot of sense unless they're going off small sample size match-ups where Davis has hit Fister a lot better than Lind.

How much fish could Fister fist if Fister could fist fish?

Thankfully I don't think he can.

Yesterday Siggian scoured the family trees of Prince Fielder and Rick Porcello and earned a well deserved point for his discovery, when all I was looking for was that they share the same agent. Today's "Find the Link" is:

This is a pretty tough "Find the Link" so I'll give a hint at 12:40 if no one has found it yet. Enjoy the game if the rain doesn't stop it!