Who Are Ya: Luis Mendoza

Share All sharing options for: Who Are Ya: Luis Mendoza

Story time! My power has been out all day and the only open spot on campus I could find was on a fifth floor stairwell, so this will be the most mailed-in post of the season due to my legs already falling asleep only two sentences into this. Luis Mendoza pitches for the Royals tonight against J.A. Happ.

Mendoza mainly throws a two-seamer and a slider with a change-up sometimes for good measure. He's a pretty average pitcher at the back of the rotation, similar to J.A. Happ.

Mendoza locates his slider consistently away from right handers which has caused the Blue Jays problems a lot this season it seems. The right handed batters can't seem to avoid whiffing on the outside off-speed pitches. 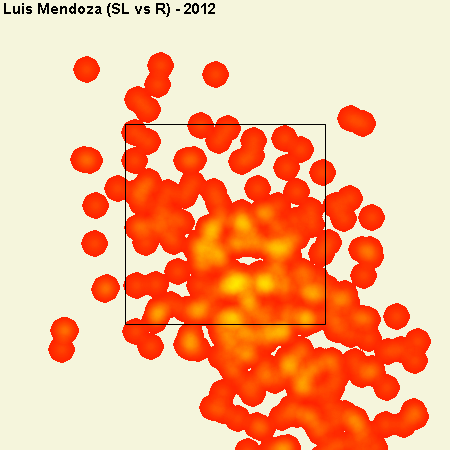 Will Lind Play: Sure? (I can't any gifs that load on this wi-fi so no gifs Nevermind)

Luis Mendoza has pretty neutral splits over the course of his career so I don't see why Lind would be held out of the line-up for a second straight day. You can only hope Rajai Davis doesn't come into play against the slider, possibly opening the door for Casper Wells' debut if Bautista is in the DH spot again.

Getupkid was able to find yesterday's ridiculously hard link about Rajai Davis hitting the first ground rule double Doug Fister gave up in his career. Today's "Find the Link" is

Find the link between Luis Mendoza and Salma Hayek.

I know it's the worst find the link so far, but that's the way it goes sometimes.

Assuming I get some power tomorrow, I'll make up for this weak post with the best pitcher preview yet!