Who Are Ya: James Shields

Share All sharing options for: Who Are Ya: James Shields

Apparently the season will continue as planned even with Jose Reyes' injury and there will be a game played tonight! R.A. Dickey looks to get his season on track against James Shields. Shields was one of the main pieces in the Wil Myers trade between Kansas City and Tampa Bay. With the Royals, Shields has gone 1-1 with a 3.75 ERA. A lot of pressure has been placed on Shields, thrusting him into the ace role of a rebuilding Royals team. He seems to be having a good effect on his new team according to this piece.

James Shields features a pretty balanced repertoire of four seam, sinker, and cut fastballs along with a curveball, change-up and rare slider. For such a solid pitcher year in and year out, there isn't a whole lot that sticks out with Shields' game. He just gets the job done with slightly above average stuff.

The way he attacks hitters is slightly different than the normal plan of attack for most pitchers, with Shields not afraid to throw change-ups to right handed batters or sinkers and sliders to left handed batters. Normally same handed batters completely eliminate change-ups from a pitcher's arsenal. As you can see, Shields' change-up is good enough to pound the inside of the zone against righties likely due to the relatively small velocity gap between his hard stuff and his change-up (92mph compared to 85mph). Being able to identify the change-up will be key tonight for Blue Jay's righties because it's a pitch Shields gets a lot of whiffs with. 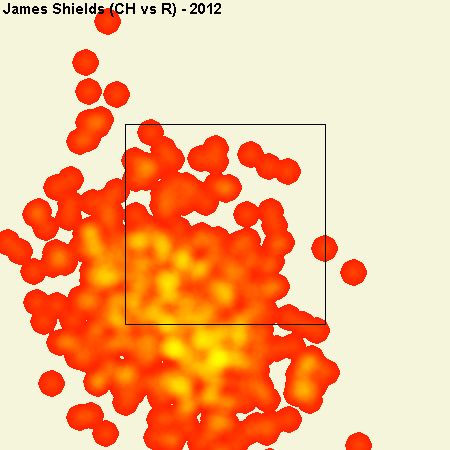 At age 31, Shields seem to be still pitching at a high level even increasing his velocity the last couple of years. It will be interesting to look back in two or three years to see which team got the better hand in the trade between the Rays and Royals this off-season, with the answer likely hinging on whether Wil Myers can avoid striking out 25% of the time. 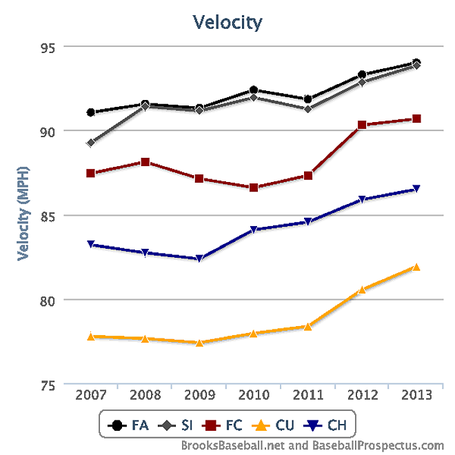 With the Reyes injury, the Blue Jays are already playing short-handed and there's no reason Adam Lind shouldn't be penciled into the line-up tonight. He had a double plus a walk last night, so keeping the momentum going would definitely be a good idea. Shields has pretty neutral splits so the Blue Jays should field the best line-up they can regardless of handedness.

Yesterday ABsteve found the pretty easy link which was the same place of birth for Luis Mendoza and Salma Hayek. Today's "Find the Link" is slightly tougher:

Find the link between James Shields and the former Arizona Diamondbacks' pitcher who was traded to Cleveland this off-season in a three team trade.

Gerse seems to have gone M.I.A. so unfortunately no Jumbotron Factoid today. Enjoy the game tonight and try to remember this team is still great without Jose Reyes!