Who Are Ya: Ervin Santana

Share All sharing options for: Who Are Ya: Ervin Santana

Whip out the brooms! The Blue Jays send Brandon Morrow to the hill against Ervin Santana of the Royals with the possibility of a Toronto sweep and a .500 record. Who would have thought we would be at least .500 twelve games into the season? Everyone? Never mind then. Ervin Santana was traded from the Anaheim Angels this past Halloween for Brandon Sisk.

Santana is 1-1 this season with five earned runs spread over 14IP. Over the course of his career he has been a wildly inconsistent pitcher, which is exactly the type of pitcher that gets traded for a minor league reliever. Strangely enough for a long-time starter, Santana is basically a four-seam fastball and slider pitcher. A poor man's Sergio Santos is essentially what the Jays will be going up against. Occasionally Santana also throws a mid-80's change-up to lefties.

Santana gets a lot of swings and misses with his slider so if he has a good feel for the pitch it could be a long day for Blue Jays' hitters. The key will be getting into fastball counts to attack his home run prone four-seamer. 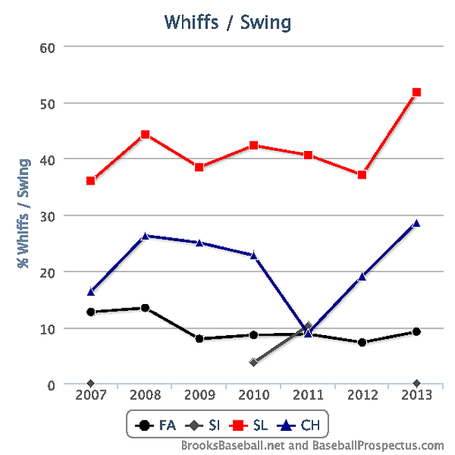 If you were wondering what a power hitter like Jose Bautista could do with Santana's mediocre fastball, here's your answer:

Santana keeps his fastball pretty high up in the zone, which results in crazy home run rates (1.97 HR/9 last year!). The Blue Jays could definitely have a couple of dingers today if Santana is off. 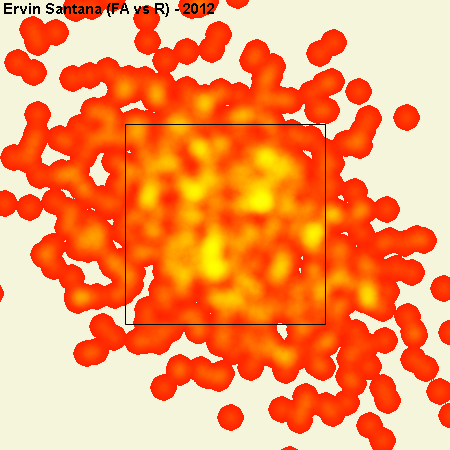 Ervin Santana struggles mightily against lefties (.342wOBA compared to .306wOBA against righties) due to the lack of a pitch that is tough on left handed batters. Sliders are traditionally much harder on same handed batters so the Blue Jays' lefties will be key to beating Santana.

Here's the leaderboard for Find the Link so far: