Who Are Ya: Gavin Floyd

Share All sharing options for: Who Are Ya: Gavin Floyd

The Blue Jays continue their tour of American League Central teams, when they welcome the Chicago White Sox to the Rogers Centre. Mark Buehrle will go up against his former team when he opposes 30 year old right hander Gavin Floyd on the mound. Floyd is a tall right hander who has been pitching for the White Sox since 2007. Gavin Floyd is consistently average, which I guess isn't that bad of a thing to be called as a major league starting pitcher.

His cutter (resembles a slider), two-seam, and four-seam fastballs make up about three quarters of his pitches thrown, with a curveball and change-up covering the other 25%. I think Gavin Floyd is the least interesting pitcher the Blue Jays have faced so far and there's isn't a lot of compelling things to point out about him. He uses his cutter to attack right-handers similarly to how other pitchers have attacked the Jays with a slider this season. It shouldn't come as a shock that Rajai Davis is hitting .188 against Floyd. 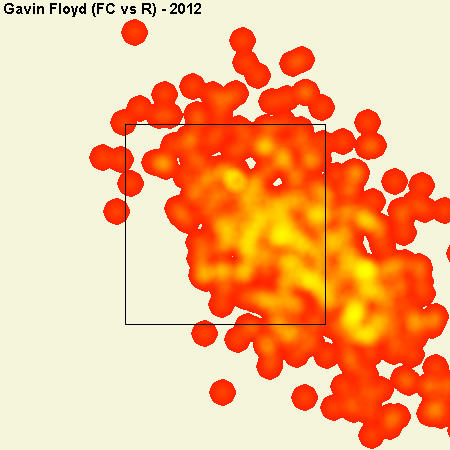 Gavin Floyd has the usual splits and struggles against left handed batters, so the Jays should make use of their switch hitters and their Kawasaki's. Adam Lind is 6-16 so if the Jays are focusing on small sample size match-ups (which apparently they are), Lind should definitely be in the line-up today. Barring any injury that we don't know about, Colby Rasmus will be back in centre field as well.

There was a tie yesterday in "Find the Link" because Damaso's Burnt Shirt and expos&nordiques4ever both found the link about Ervin Santana relating to how he allowed a run while no-hitting the Cleveland Indians. I think to avoid ties in the future, every legitimate guess should be a new thread and not a reply. That way everyone can see which answer came first. Today's link is about as boring as Gavin Floyd, surprisingly enough.

See you all in the GameThread!