Who Are Ya: Jose Quintana

Share All sharing options for: Who Are Ya: Jose Quintana

I was hoping to have a Cal Ripken-esque streak with these game previews, but it came grinding to a halt after 13 games. Tonight, J.A. Happ opposes Jose Quintana in a battle of left-handed fifth starters. Quintana is pitching in his second big league season after never making it to the show with either of the two New York teams.

Jose Quintana had a 3.76 ERA last year in 25 games (22 starts), so there's a chance he could be a reliable piece at the back of the White Sox rotation. He mainly uses a four-seam fastball, hard slider/cutter, and curveball along with a rarely used change-up. Nothing really jumps off the screen about Quintana similar to the other two starters the Blue Jays have already seen in this series.

With Quintana being relatively new to the majors, there isn't a whole lot of cool graphs or charts on him yet. It's interesting to note that Quintana has thrown 101 change-ups in his major league career, and they have all been to right-handed batters. 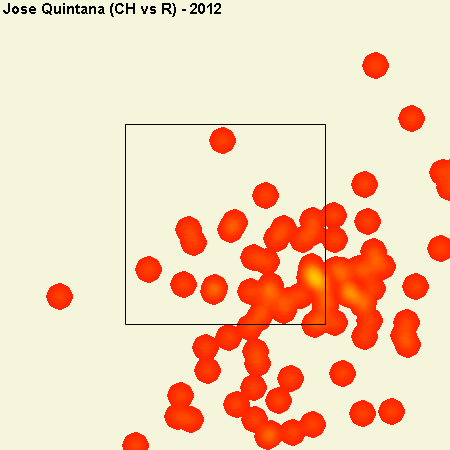 This post over at South Side Sox outlines how hitters are sitting on inside fastballs from Quintana this season. If there's one thing Blue Jays' power hitters can do, it's hit the fastball.

Should Lind Play: NO! (The piece of paper in this gif is a line-up with Lind's name on it)

Jose Quintana has held left handed batters below a .300wOBA (.299) in his short career while having a .335wOBA against him by righties. This should definitely be a day off for Lind and possibly even Colby Rasmus. Rajai Davis has hit Quintana well in an extremely small sample size and should probably be in the line-up as the right handed side of the platoon with Lind. Making Jose Bautista the DH as he returns from injury (if he can play) would be more do-able with Davis in the line-up as well. If John Gibbons plays his cards right, the Blue Jays line-up could feature eight right handed batters and the lone lefty in Munenori Kawasaki who isn't on the team for his hitting anyway.

After a day off yesterday, today's "Find the Link" is:

Find the link between Jose Quintana and the player who recorded the last out of David Cone's 1999 perfect game.

Have a good day folks!