Who Are Ya: Chris Sale

Share All sharing options for: Who Are Ya: Chris Sale

One of the best pitching match-ups of the early season sees R.A. Dickey take on lefty Chris Sale of the White Sox. This duel will definitely be one to watch as the Blue Jays hopefully can claw back and split the series with the Sox from the south side of Chicago. After being picked 13th in the 2010 draft, Sale has more or less dominated at the big league level making the move to starter last year in his third major league season. He has given up 11 earned runs in 19 innings so far this year, so he's off to a bit of a slow start.

Chris Sale throws both the four-seam and two-seam fastball along with a slider and a change-up. His two-seam fastball which he throws about 30% of the time, has great sinking action which results in a lot of ground balls. As a reliever Sale threw his fastballs at about 95 MPH, but after making the switch to starting he's averaged about 91 MPH on his hard stuff. Sale's plan of attack against lefties is a pretty strict fastball-slider combination (although that might be "changing"), while he goes against righties with his fastball and change-up, along with the slider as well.

While rarely throwing change-ups against lefties, Sale pounds the outside of the zone with it against right handed batters. 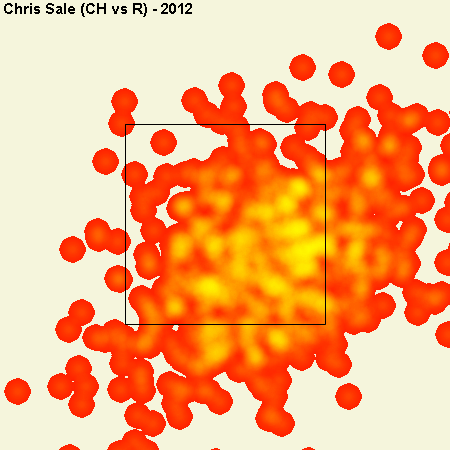 Another interesting thing about Chris Sale is his mechanics. He's almost a full side-arm pitcher and the timing in his delivery looks like it creates a lot of stress on his elbow and shoulder. There's been a lot written about the possibility of future injuries for Sale if he doesn't fix the timing in his mechanics, so that's definitely something to watch in the future. Here's a GIF of his mechanics from earlier in his career:

Should Lind Play: HA NO!

Chris Sale is dominant against lefties, even though he's basically limited to two pitches against them. In his career he has a .256 wOBA against lefties and a .301wOBA against righties. Add in the fact that he's now trying to throw the change-up more against lefties and it's a definite day off for Adam Lind. Since Jose Bautista sounds like he'll still be out of the line-up, it would seem Colby Rasmus will have to stay in the line-up and face Sale today. If you're expecting a Colby Jack tonight you might be disappointed, Chris Sale has given up only three home runs against lefties in his whole major league career (that's less than one percent of the total left handed batters he's faced).

Find the link between Chris Sale and the best #15 seed in NCAA basketball tournament history.

Enjoy the pitching duel tonight, it should be great!