Who Are Ya: Justin Masterson

Share All sharing options for: Who Are Ya: Justin Masterson

OPENING DAY! After a long, cold winter, the start of the season is finally here. For most gamedays this season they'll be a post up focusing in on the opposing team's starting pitcher along with some other news and notes. This much anticipated opener sees R.A. Dickey opposed by Cleveland Indians hurler Justin Masterson. In the first game of the 2012 season Masterson shut down the Blue Jays, pitching 8 innings giving up one run and striking out 10.

Masterson leans heavily on his sinker (58.3% of his pitches last year) leading to a 56% career ground ball percentage. Due to his sinker having so much movement, it has also led to Masterson having the tightest strike zone called against him (minimum 200IP since 2008).

Masterson features a straight fastball, his go-to sinker, a slider, and a rarely used change-up. As you can see below (discount the 2013 numbers), Masterson has begun to slowly work in his slider more often instead of his fastball which seems like a good idea as the velocity difference between the slider and sinker is much greater, leading to a lot of swings and misses on the slider. 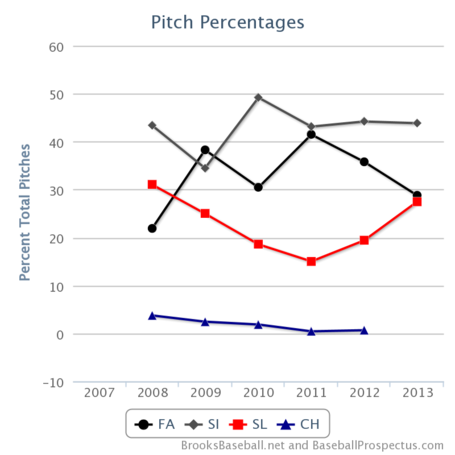 As Woodman663 noted in his scouting report last year, Masterson uses his four-seam fastball up in the zone to contrast his sinker (especially against lefties). He'll definitely have to be careful against this powerful Jays line-up as his low 90's fastball down the middle won't fool the likes of Jose Bautista and Edwin Encarnacion. 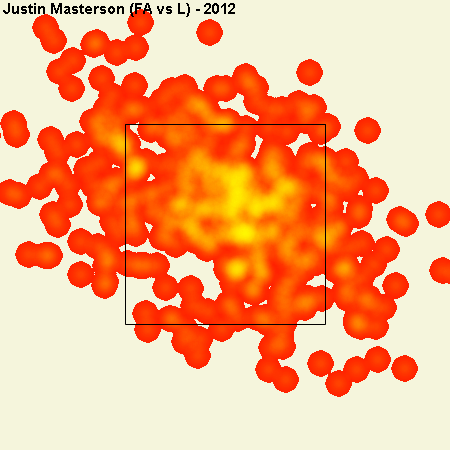 Not surprisingly, Masterson struggles against lefties due to his heavy reliance on his sinker. In his career he has pitched righties to a .276 wOBA while lefties hit him around for a .351 wOBA. In a small sample size of 15 AB, this trend has held up in the Lind vs. Masterson match-up as Adam has got on in 7 of those at-bats. The lefties will be key in this game against Masterson as his low arm slot is brutal for same-handed batters. It's nice that all the new switch hitters the Jays have this year are coming into play on the first day of the season.

Ryan from the Indians' SBNation blog Let's Go Tribe was kind enough to send us his thoughts on the starters we'll see in this series. He had this to say about Justin Masterson:

"The question for Masterson is whether he can hold left-handed hitters to a manageable OPS; I don't think he'll ever dominate them, but the goal is to limit the damage they inflict on him in a start. He has the potential to be a nice middle-of-the-rotation pitcher, a pitcher that is extremely valuable to any pitching staff because of his durability, but if he's heading Cleveland's rotation by this time next year, none of the high-upside guys (such as Carlos Carrasco or Trevor Bauer stepped up)."