Review: Out of the Park Baseball 14

Share All sharing options for: Review: Out of the Park Baseball 14

OOTP 14 is out. You can buy it here. I've had a review copy for a few days, not really long enough to try out all the bells and whistles, but long enough to get a feel for the game.

I'm a big fan of the Out of the Park Baseball franchise, I have been for several years now. Every year it gets a little better. This year, along with the complete through the minor league system 2013 rosters (they do miss the odd player but it is pretty complete), they've updated the 'Player Origin System'. improved the trading AI (no team would take Esmil Rogers from me, when I shopped him) and many other behind the scene improvements. You can take a look at the long list of new features here.

In the game you pretty much get to do all the things a major league GM do. From the game I've learned that players with options are worth their weight in gold. There is a draft. A rule 5 draft. Players have moods, if they don't feel like you using them properly they will complain, and maybe ask for a trade. Young players players improve, older ones decline. You can make trade, negotiate with free agents and move players up and down your minor league system.

And you get to do most of the in game stuff a manger does: pick the lineup, pitching rotation, pinch hit, pick relievers, decide when to hit and run, steal or even bunt (if you really must).

I've started a season as the 2013 Blue Jays. In my OOTP world, it is May 11th. April went, surprisingly, even worse than it is going for the real Blue Jays. At one point we were 4 and 10. Some of this will sound familiar:

Anyway, the game is great. I think it is well worth the money. I get hours of play out of it.

Here are a couple of screen shots: 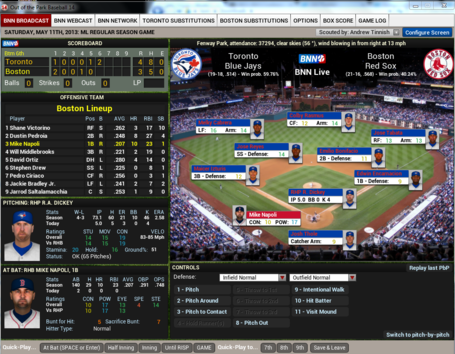 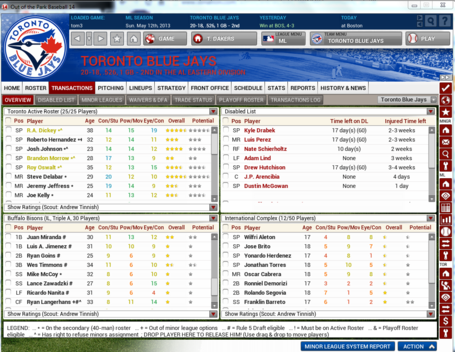