Who Are Ya: Chris Tillman

Share All sharing options for: Who Are Ya: Chris Tillman

Battle of the fifth starters in Baltimore tonight, as J.A. Happ goes up against Chris Tillman. Tillman was drafted in the second round of the 2006 draft quickly becoming a top prospect, but has not been that great of a pitcher in the big leagues. He had a 2.93 ERA last year that was largely based off a .221 BABIP, which followed the trend of the enormous amounts of luck the Orioles had last season. He hasn't had the same luck this year giving up 11 ER in 14 IP.

He sports a fastball, hard slider, curveball, and changeup relying heavily on just the fastball (About 50% last year). He doesn't strike many people out and largely just relies on the defence behind him to get out of innings. He's become a fly-ball pitcher averaging around 44% FB for the past couple years making himself pretty dependent on hoping for low FB/HR rates.

There isn't a lot more to the one-dimensional Tillman who is a perfect example of pitchers who can go from looking great, to looking terrible solely based on "luck". This chart shows how Tillman keeps his fastball up and seems like a pretty good match-up for the great fastball hitters of the Blue Jays. 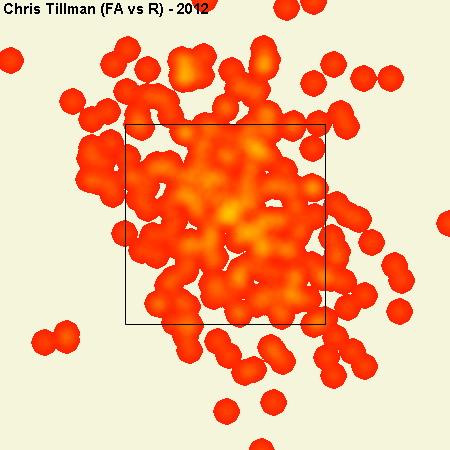 Chris Tillman has reverse splits because his best secondary offerings are the changeup and curveball, which are more effective against opposite handed batters, but that's not important right now! Adam Lind had four walks yesterday and a slight reverse split situation is no reason to sit him now! He doesn't even need to swing the bat because pitchers are clearly too afraid to pitch to him. Yesterday's lineup was pleasant on the eyes and I'm hoping they run the exact same lineup out there today in Baltimore.

Today's "Find the Link" for one of the most boring pitchers in the big leagues is:

Find the link between Chris Tillman and the oldest member of the starting rotation in Tillman's hometown.

Enjoy the game! I have a feeling Toronto is going to hit Tillman hard.