Share All sharing options for: Back in Blue Members Played Baseball Video Games to Raise $2400 for the Jays Care Foundation

The field and stands of the Rogers Centre may have been empty on April 13, 2013 as the Blue Jays were playing in Kansas City, but the Jays Care Community Clubhouse was filled with five guys, one gal, several game consoles, tons of baseball video games, and of course, pizza and pop. I stopped by to visit and and saw that while they were having fun, they were serious about raising funds for an important cause.

Back in Blue, a Blue Jays fan-made live video podcast (episodes are live streamed every Sunday at 9 pm Eastern right here at Bluebird Banter), don't just talk about their favourite baseball team, but they are also socially conscious. Last year, they decided to organize a fan fundraiser for the Jays Care Foundation, the charitable arm of the Toronto Blue Jays. Jays Care has several programs that targets youth, which includes their Rookie League baseball program for children in under-resourced communities, and their Field of Dreams program, which provides grants across Canada to support capital projects that increases children's access to recreational and community spaces.

"We just thought that it would be a great way to help the kids, we believe that the Jays Care Foundation does a good job at creating programs for kids in the [Greater Toronto Area] and across Canada," Back in Blue co-founder Nick Hansen told me, "we all have a background growing up playing baseball also, so we like the opportunities that [Jays Care] creates for kids to go out there and do a lot of the same things we did as kids."

The group, who are based in the Kitchener-Waterloo area just northwest west of Toronto, drove in the day before the event to do some setup work, then came back in the early hours to get the place ready to start broadcasting (and playing) right at 9 am to start their 12-hour gaming marathon. They scaled it back from last year's 24-hour format in order to do it right in the Rogers Centre.

Asked about the format of the fundraiser, "we like to play video games, and Reid [Price] has a career background in video games, so we thought a marathon would be the best way to do it."

They were on video live stream for the entire event (with co-founder and producer Brad James at the controls the whole time) and they were able to keep commentating about the games and the cause throughout. Peter Bean of the Canadian Baseball Network was there to operate the live chat and to monitor the donations coming in. Donations were always flowing so he often had to interrupt the broadcast to give Nick updated numbers. 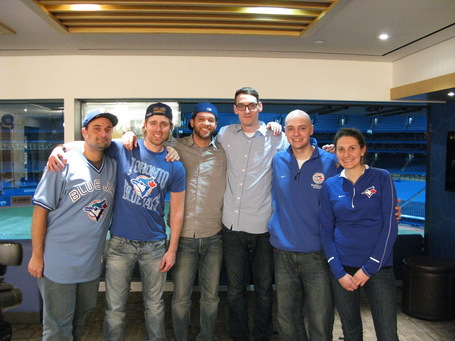 A goal of raising $2000 was set early on, double what they wanted to reach in 2012. To help with their increased goals, a number of fans and friends decided to donate prizes for fundraiser. Back in Blue started off with $625 at the beginning of the day, and the numbers increased steadily, reaching $2400, 20% more than they had sought to raise. Nick, Reid, Andrew, and Brad spent a lot of time to set up the event, but I'm sure seeing the great success made it well worth it.

Before heading back to take his turn at the game controls, Nick added, "last year by the end of the 24 hours we had $1640, and we ended the year with $2062, so we definitely are accepting donations all year long."

Back in Blue is a partner of the SB Nation Network Producer Program.