A Look at Last Night's Zone

Some questionable strike calls were made last night, but upon further inspection, they didn't seem all that questionable after all.

Share All sharing options for: A Look at Last Night's Zone

Last night's strike zone, at least from watching on TV, appeared to be a tad, well...large. The zone seemed to expand quite a bit in the ‘outside' area depending on which handed batter was up at the plate. I understand that it is natural for an umpire to call more outside ‘on the black' pitches as strikes with lefties at the plate due to positioning, but let's see how Ted Barrett did last night.

Please note that these are from the umpire's perspective, and that pitches labeled as "Baltimore" mean that they were thrown by Baltimore pitchers. Pitches that are red are called strikes, pitches that are green are balls. All data courtesy of Brooks Baseball. 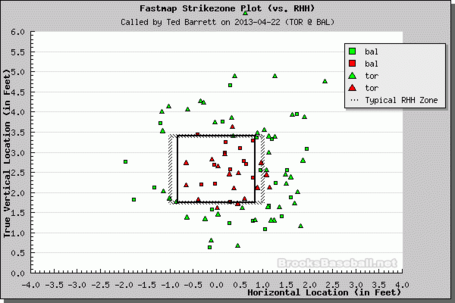 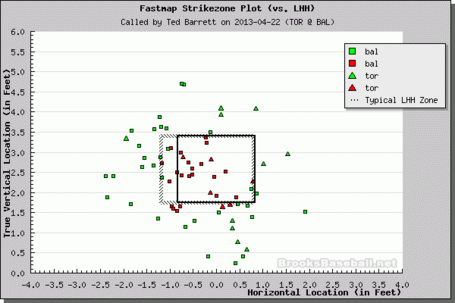 It appears as though Barrett was fairly consistent all night - despite some pretty low strike calls to both Blue Jays and Orioles hitters. There were two pitches, however, that really struck me as reaches, in terms of them actually being strikes.

The first of the two close pitches occurred in the 7th inning of the ballgame with had-previously-reached-base-safely-nine-times-in-a-row-Adam Lind up at the plate. Lind had swung at a ball low and fouled another off against Chris Tillman at this point in the at-bat, where he took a called strike three. 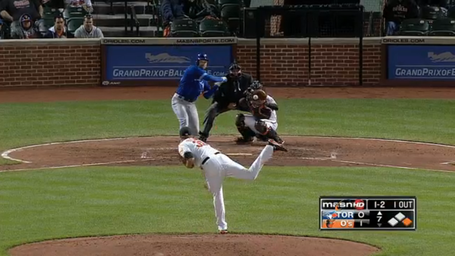 It looks to be right on the black, if not a bit outside. Look at Barrett's positioning though - he is slightly inside the plate, thus making the zone stretch a bit outside.

How does it look in pitch-fx? 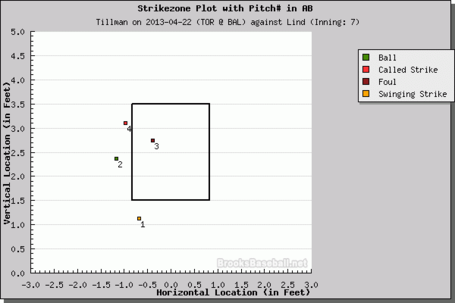 Appears to be just outside the zone - but again, the strike zone tends to expand a bit with lefties at the plate. I'd say that had this been a strike call in favor of the Jays, no one would say much (no one said much anyway). Why am I even saying anything?

Now on to the second pitch I wanted to look at - it's one of the apparent low and away strike calls against lefties in the "vs. LHH" image at the top.

I don't have a real-life photo or video from this one Big thanks to Dan for getting a screengrab of this one for me from MLBTV (which I don't have). The Jays dugout appeared to be pretty upset with this call. I even looked away from the TV assuming it was a ball before hearing Buck Martinez shout something incomprehensible about the called strike. 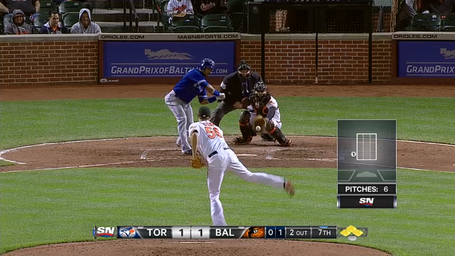 The pitch looks to be extremely low, but here it is in pitch-fx (#2).

Right on the corner, the pitch managed to stay in the zone both vertically and horizontally. Bonifacio would end up striking out swinging against Darren O'Day to end the inning.

All in all, despite my initial thoughts, the zone wasn't in fact too bad during the game. I suppose I'm looking for an excuse for the sub-par offence so far this year - the guys really just need to start hitting.

If you don't already know about the wonderful work done at Brooks Baseball, I would suggest you take a look. Flipping through the called balls and strikes from the games last night will give you an indication of the averageness of the zone in yesterday's Jays-Orioles game.