Who Are Ya: Miguel Gonzalez

Share All sharing options for: Who Are Ya: Miguel Gonzalez

Miguel Gonzalez takes on R.A. Dickey as the Blue Jays try to even the series tonight in Baltimore. Gonzalez was signed as an amateur free agent from Mexico, similarly to everyone's favourite Blue Jays prospect, Roberto Osuna. He bounced around the minor leagues in different organizations for a few years then had a great season last year, capped off by pitching in the playoffs. He hasn't pitched too badly this year giving up 8 ER in 18 IP. Last season was Gonzalez's debut season and he went 9-4 with a 3.25 ERA. This was largely because of a .260 BABIP and 82.6% strand rate. It's unbelievable how much good fortune the 2012 Orioles had.

Miguel Gonzalez features a fastball, sinker, curveball, slider, and split finger. In 2012, Gonzalez's splitter was pretty dominant getting a whiff on almost 50% of swings. You can see that Gonzalez pretty much has movement to all parts of the plate with his pitches: 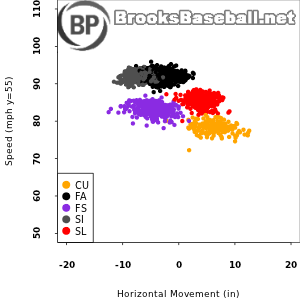 With this being only Gonzalez's second year in the majors there isn't a whole lot of interesting trends to look at, but I noticed that his release points have been all over the place in these first two years. It seems each pitch comes from a completely different point both horizontally and vertically. To get the cut on his slider he throws it from out wide, which you would assume makes it easier to read from the batter's box. 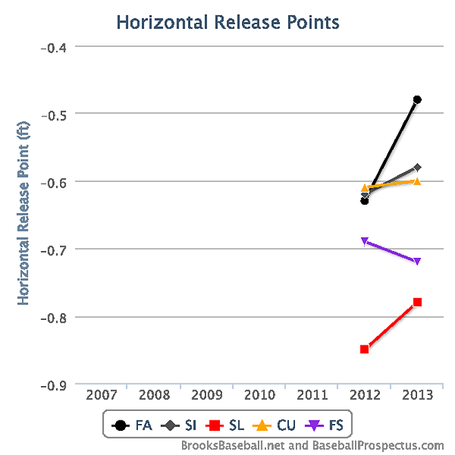 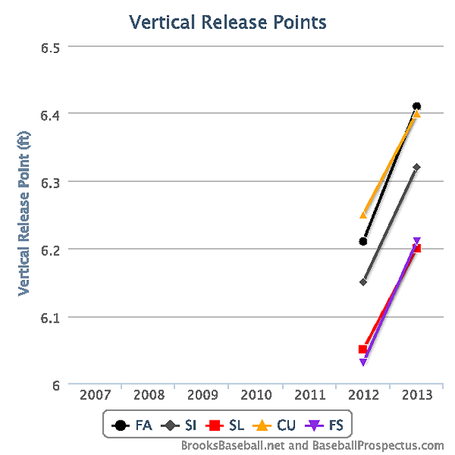 Adam Lind is taking walks and getting hits like it's 2009, which is making Jays' fans party like it's 1999. Miguel Gonzalez hasn't pitched long enough for his splits to be very meaningful, but this a definite situation where Lind should play. In the small sample size of six at-bats against Gonzalez, Lind has 3 hits. The Blue Jays should probably just keep running out the lineup they've been playing with for the past couple of days because it's about as good as it's going to get.

Find the link between Miguel Gonzalez and the Blue Jay with the highest slugging percentage this season.