Who Are Ya: Hiroki Kuroda (Take Two)

Share All sharing options for: Who Are Ya: Hiroki Kuroda (Take Two)

After an exciting win yesterday in Baltimore, the Blue Jays try to make it two straight against Hiroki Kuroda and the Yankees. This is the first time this season that the Blue Jays have faced the same starter twice, and the preview from the first start can be found here. I'm not 100% sure on the format I'll be using for repeat pitchers, but we'll see how this goes.

Kuroda went 7.1 IP against the Blue Jays last Saturday giving up three hits and one earned run (David Robertson allowed the run he inherited from Kuroda to score). He struck out 7 Blue Jays batters in what turned out to be an 11-inning victory for the Yankees after Aaron Loup's throwing error. This is how Kuroda fared against the Blue Jays the first time around: 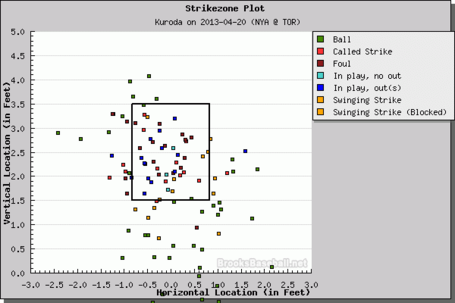 Hiroki Kuroda essentially threw sinkers, sliders, and splitters during his clinic against the Blue Jays batters. He pitched very well, although he was helped by some favourable calls such as this J.P. Arencibia strikeout: 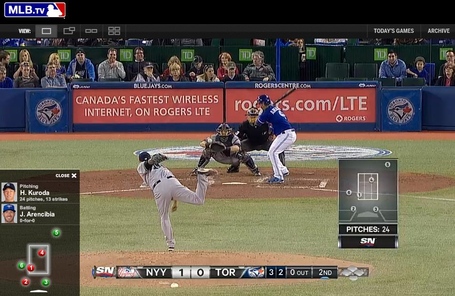 That punch-out came on the slider as did many others on the day against right handed batters. The Blue Jays showed no signs of being able to hold off on Kuroda's slider that tails off the plate which lead to a rough day against the Japanse right hander and his great command. Here's Bautista whiffing on a similar slider. 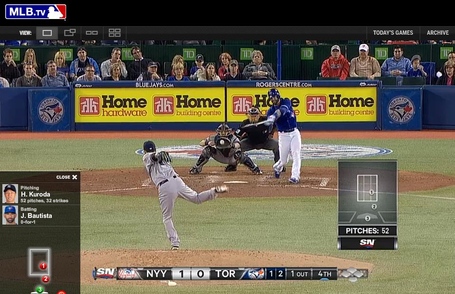 If the Blue Jays are going to have more success today than the last time they faced Kuroda then they'll have to start making some solid contact, which is easier said than done. On that depressing Saturday afternoon J.P. Arencibia had four strikeouts, Brett Lawrie had three, and Bautista and Colby Rasmus each had two, so it's clear that the plate discipline will have to improve if the Jays are going to have any shot of roughing up Kuroda the second time around. They'll also need an ump that doesn't call outside strikes like this one to Colby Rasmus (4th pitch of AB-a slider): 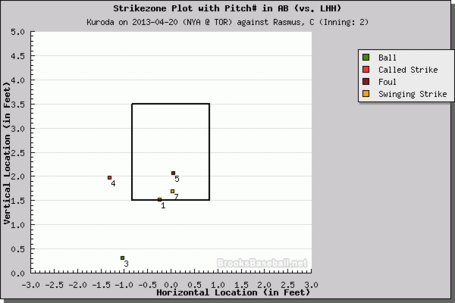 Should Lind Play: Probably Not Happening

It doesn't seem likely that Adam Lind will be back with the team after his wife went into labour yesterday.

Find the link between Hiroki Kuroda and the older brother of Jered Weaver.

Let's hope the Blue Jays even the score against Hiroki Kuroda tonight!