Who Are Ya: Ivan Nova (Take Two)

Share All sharing options for: Who Are Ya: Ivan Nova (Take Two)

Well, this losing every game thing is starting to get a little irritating. Today was going to be a rematch of last Sunday's win with Josh Johnson taking on Ivan Nova, but then this happened. So Aaron Laffey will try to limit the damage and give the Blue Jays bats an opportunity to hit around Nova. During last Sunday's start, Nova went five innings (also gave up a walk and a double in the sixth before being relieved) giving up seven hits, four walks, and five strikeouts resulting in four earned runs. He lacked command during most of the start and it could have been a lot worse than just the four runs.

I didn't catch this during the game, but Nova almost exclusively pitched with his two fastballs (four-seam and sinker) and his curveball. You can see how wild he was in this chart: 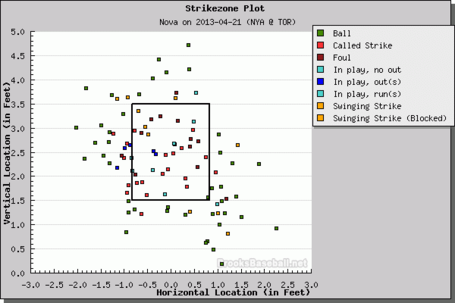 By my count, left handed batters got on base 8 of the 13 plate appearances against Ivan Nova, mainly due to the fact that he struggled with the command of his curveball making it tough for him to challenge lefties. You can see he was hardly even around the plate against lefties during the start. 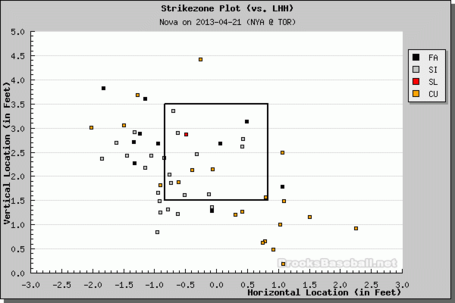 If the Blue Jays want to come up with a game-plan against Nova, they should probably watch Adam Lind's at-bats as he walked against Nova three straight times, although he didn't really do anything more than let Nova throw balls.

Against the right handed batters, Nova tried to get them to swing at sliders and curveballs off the outside of the plate, which was successful when he was able to locate them effectively. MLB.TV doesn't seem to be working so I won't be able to post any screenshots, but here is how Nova attacked Edwin Encarnacion in the fifth for a swinging strikeout. 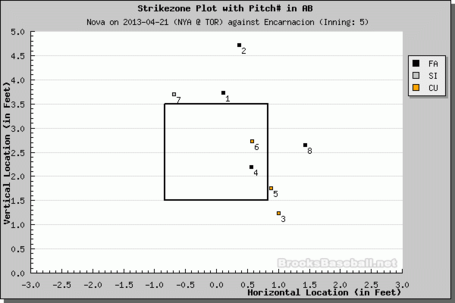 Should Lind Play: Not Happening

Adam Lind is still on the paternity list and should be back for Sunday's series finale in New York.

Find the link between Ivan Nova and the phenom pitcher who was traded for Jesus Montero.

Enjoy the game tonight and pray to the baseball gods that Nova doesn't have his command.