Theoretically, it could be worse: Blue Jays 4 Yankees 6, Aaron Laffey designated for assignment

Share All sharing options for: Theoretically, it could be worse: Blue Jays 4 Yankees 6, Aaron Laffey designated for assignment

Not just for the Blue Jays, but for the Yankees too. They lost their starting catcher Francisco Cervelli in the first at bat to the game and then starting pitcher Ivan Nova was pulled from the game in the third. According to the Yankees, Cervelli broke his right hand and will be missing at least six weeks, and Nova has pain in his right elbow, and is scheduled for an MRI later tonight. But at least they won the game.

The Blue Jays' emergency starter Aaron Laffey did not have it at all. He was taken out of the game in the third inning throwing just 55 pitches, but only 23 were for strikes (42%). He walked five Yankees and allowed two runs and two hits. The bullpen did not fare much better. Brad Lincoln, Aaron Loup, Steve Delabar, and Darren Oliver combined for 10 walks on seven strikeouts.

Laffey was designated for assignment immediately following the game, as expected by many of us in the GameThread. I think I used to explain what a DFA was but I think most Jays fans get it by now. Laffey is the sixth Blue Jay to get designated for assignment this season, following Jeremy Jeffress, Dave Bush, Alex Burnett, Casper Wells, and Ramon Ortiz. The corresponding roster move has yet to be announced, although it will probably be a pitcher. To cross some names out, Miguel Batista and Todd Redmond are on the 7-day disabled list, Claudio Vargas just pitched today for the Buffalo Bisons, Chad Jenkins is still rehabbing, and Ricky Romero is pitching in Dunedin tomorrow. Perhaps Buddy Carlyle? 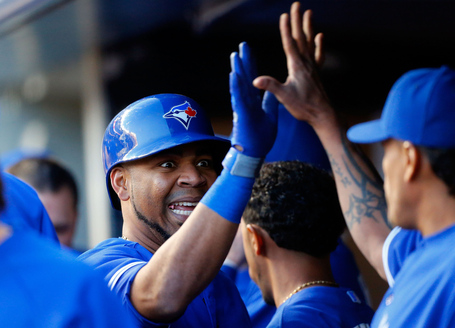 Jose Bautista added another solo shot in the top of the eighth and that was about it for the Jays' offense. A bunch of solo homers.

There was some ugly baseball out there too. The top of the third was ended on a strike-em-out-throw-em-out double play with Encarnacion striking out and Rajai Davis making the third out trying to steal third. Two Yankees runs were gifted by Jays: Lincoln threw a wild pitch to bring Lyle Overbay home from third, and Robinson Cano was able to score when J.P. Arencibia was unable to handle a four-seamer from Steve Delabar. Of course, the very next pitch Delabar was able to get an inning-ending strikeout of Eduardo Nunez. Arencibia shouldn't be blamed for the loss, but he didn't do his job very well, especially on the passed ball. At the plate, he went 0-for-4 with two strikeouts.

Former Blue Jays Vernon Wells and Lyle Overbay both had RBIs, with Wells hitting a sac fly to score another former Jay Ben Francisco, and Overbay hitting a triple (!) that was poorly played by centre fielder Colby Rasmus. Rasmus, in his debut in the second slot in the lineup, struck out twice, but did take a walk and had an RBI-single.

Yankees' David Phelps deserved the win today, after going four innings in an emergency relief situation after Nova left the game. He proceeded to allow just one run on two hits while striking out nine Blue Jays. There has only been nine Yankees relievers since 1916 to record nine or more strikeouts, the last was Jay Howell back in 1983. The last major league reliever to do so was the Reds' Aaron Harang back in 2008.

The Blue Jays did get the bases loaded against the legendary Mariano Rivera (if you heard the audio from the Sportsnet broadcast, you wouldn't be able to tell whether Buck Martinez and Pat Tabler were calling a game or if they were narrating a Hall of Fame audio tour in the Mariano Rivera room) on singles by Brett Lawrie, Maicer Izturis, and Rajai Davis, but Colby Rasmus struck out to end the game.

Game chart from FanGraphs: Looks like nothing special. That bases loaded situation in the 9th apparently didn't matter that much. 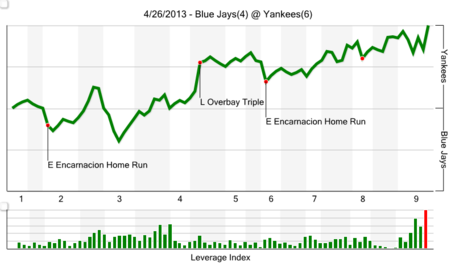 Yes, the Blue Jays have been playing some horrible baseball. These games are hard to watch, especially with the feeling that the offense would likely not be able to pick up mistakes made by the pitchers. I'm not worried, or panicking, but I am very disappointed in this ball club. Just, please, no clamouring for John Gibbons, Pete Walker, or Chad Mottola to be fired. Who knows, maybe tomorrow the Blue Jays will chase C.C. Sabathia after a few innings, causing the Yankees to dip into their bullpen! It could happen!