It's been a tough month, and the fanbase has questions. We have answers.

We here at Bluebird Banter thought we should take a moment to answer some of the more, how should I put it, common questions of Blue Jays fans over the past couple of weeks. Nobody actually asked these, but they seem prevalent enough on twitter, Jays Talk, comments, etc, to warrant answering. All answered by yours truly unless noted.

Is it still early? It's almost May. 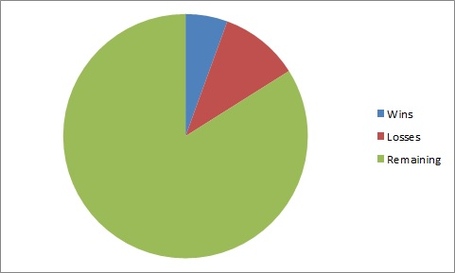 Yes, it's still early. The Jays are 9-17, which means they've played 26 games and have 136 remaining. There are a tonne of anomalies at this point in the season, at the player and team level, as there are every season in baseball. It certainly sucks to have started off this poorly, and it's created a hole that becomes harder to climb out of as the season wears on, but there is still a ridiculous amount of time left.

To wit: on May 1 in 2011, the Detroit Tigers were 12-16 and the Arizona Diamondbacks were 12-15. Both teams would win 82 (or more) games the rest of the way, rallying to make the playoffs. There may not have been anything as extreme as that last season, but I'd bet if you pulled the data, there are ALWAYS teams that have a rough first month and rebound just fine.

9-17 is terrible, especially since the run differential also indicates a team with a 9-17 "talent level," but we're only one sixth of the way there. There's plenty of time to rebound.

Why don't they fire John Gibbons?

Because it's not his fault. Honestly, this is a silly suggestion. He didn't injure Jose Reyes, Brett Lawrie and Jose Bautista. His batting order isn't causing the poor performance. He's not responsible for the OBP, Dickey's rough opening day, or Josh Johnson's triceps tightness. Managers don't have the ability to single-handedly sabotage a season in a month, and there's very little he can do on a day-to-day basis that you could point to and say "fireable offense."

What do people mean by small sample size? What's meant by random variance?

The Jays' leader in plate appearances is Melky Cabrera with 113. Only one other player even has 100 (Edwin Encarnacion). Here are the number of plate appearances at which some offensive statistics have been found to stabilize (that is, the point at which the performance to date is a strong predictor of future performance). Before these levels, it's a whole lot of noise.

So, yeah, almost everything is just noise at this point, except perhaps "power," is a lot of noise at this point. This is a positive for several reasons: the Jays OBP woes likely contain a fair amount of noise, while their power is relatively legitimate. This, of course, matches up with what you'd think just looking at the stats thus far.

Add in that the Jays have a .262 BABIP (batting average on balls in play), the lowest in the Majors and well outside the expected full-season range for teams, and there's even more reason to hope some regression is forthcoming.

On the pitching side, it really comes down to trusting that guys like Dickey, Johnson and Buehrle will find their groove - all pitchers have mediocre starts, and I'm sure if you mined their game logs, you'd see similar stretches of three starts where they struggled.

Why don't we promote Jim Negrych?

Probably because he wouldn't help much. Negrych is a fun story so far, with an insane .550 wOBA through 16 games at Triple-A Buffalo. But like the question above, small samples work both ways, so Negrych is likely performing over his head. Though he has a strong minor league track record at the dish, he's usually been slightly above average as opposed to Greatest Ever. He's also a 28-year old who has never cracked the majors - while there's a slim chance he's Jose Bautista, there's also a really good chance he's Yan Gomes.

Yes, the team has gotten awful production from their second basemen thus far, but those guys have guaranteed contracts and that matters, too. If Negrych is still going bananas this time next month, and Emilio Bonifacio and Maicer Izturis are still struggling, it can be revisited.

Why don't they fire the hitting coach?

Same reasons for Gibby, mostly, but also because the team's approach hasn't been as awful as some think. They're roughly league average in walk rate, sixth in strikeout rate (worrisome but not exactly extreme), and are in the top third of MLB in pitches per plate appearance. If you look at the more advanced plate discipline stats like O-Swing%, Swing%, Contact%, etc, the Jays aren't doing terribly in any one area, meaning there aren't approach issues screaming to be changed. The one thing they may want to look at, though, is their first pitch approach, as they fall behind 0-1 more than almost any team in baseball, and then see a steady diet of outside the zone stuff. The Jays aren't swinging at too much overall or outside the zone, and alternatively they're not being too selective, they just need a bit of early-count refinement, not a new hitting coach.

Why do the Jays suck? Should they stop hitting homers and focus on getting men on base?

The Jays have a terrible OBP (27th), a terrible average (27th) thanks mostly to a poor BABIP (30th), and thus don't have any runners on base when they hit all of those delicious dingers (3rd). Does this mean the Jays should stop hitting dingers to get more men on base and start rallies? No, that's stupid. Home runs are guaranteed runs on the board, baserunners are potential runs. And I know some pitchers are poor out of the stretch, but I'd bet a 400-foot blast would rattle me just as much as a man on first (unless it's Munenori Kawasaki and his fake steal). Right now, to a man the Jays are underperforming the expectation we had for their OBPs, except for Adam Lind. Some might not meet our expectations, but I doubt every damn player is going to have a career worst year in that regard. Once the OBP climbs, there will be men on base for the taters.

On the pitching side, the Jays are mediocre in strikeouts (22nd) and walks (9th most). They've been roughly league average at holding runners, with BABIP, and with HR/FB rate. The issue with the latter is that the Jays induce fewer groundballs than any other team (perhaps not a bad thing given the defense up the middle), instead allowing the third most fly balls and a league average line drive rate. While fly balls drop for hits less often than grounders and liners, they also leave the park way more often. Despite the defensive struggles in the early going, the Jays might be well served to try and coax a few more balls on the ground while also getting back to "throwing" instead of "pitching" if you're a certain former-strikeout-artist-inexplicably-turned-pitched-to-contact-guy.

Why don't we panic? (Answered by Minor Leaguer)

That is one of the questions I can't understand. My question is: why panic at all? Yes, it is a horrible, frustrating start to the season, but I just don't know what panic will do. If fans panic and worry and freak out that the team is going to find it hard to win 60 games what would that accomplish? At that point why doesn't one just walk away from the team and just focus on something else? And why would any fan want the club's front office to panic? Panic induces clubs to make desperation moves, ones that could help a little but end up hurting the team in the long run. I would rather have my club's front office be as calm and emotionally detached as possible: they need to use logic, fact, and statistics to make decisions. And seriously, if the team is truly as bad as you think it is, what kind of in-season moves would work?

As a fan, I've waited 20 years: Why should I wait anymore?(Answered by Minor Leaguer)

I am a fan of the same club, the same one that hasn't been in the playoffs since the end of 1993, so I completely understand how you feel. However, I don't understand the logic of making bad, desperation moves just because the club hasn't succeeded for a long time. The Blue Jays under Alex Anthopoulos made their moves not only to win this year, but to win in the next few years as well. I don't want to see some sort of move that damages long-term sustainability for short-term emotional satisfaction. You've waited 20 years already, don't lose your patience now.

Okay, but WHY have they been so unlucky, and when will it turn around?

I kind of explained a lot of the why earlier, but basically the Gods just hate us. I think it's because Tom didn't make the ritual sacrifice in spring, but I can't be sure.

It should, in theory, turn around soon-ish. However, regression doesn't work where you'd now expect a torrid hot streak to "balance it out." That might happen, and I hope it does, but in mathematical terms what we'd expect is the Jays to ‘regress' to their expected level of performance. So if we thought they were a 90-win team before, we'd expect them to start playing like a 90-win team now. Unfortunately, a 90-win team would be expected to win 76 games the rest of the way, likely leaving the Jays short of the playoffs at 85 wins. Instead, the Jays almost NEED that hot streak now, or to play like a 95-win team, to make up for the poor start.

Again, it's not cause for panic. It means the games are of a more leveraged nature moving forward, sure, but it's still April 29. There are still 136 games left. The starters will be better, the OBP will climb, the dingers should continue, and the record will improve. The chances of making the playoffs have declined, sure, that's just math, but they were never 100% and they're not 0% now, and that's important to remember with five months left to play.