Who Are Ya: Ubaldo Jimenez

Share All sharing options for: Who Are Ya: Ubaldo Jimenez

I spent about an hour pondering whether I should stop writing about this team because of how bad they are, but I decided I would stick it out for the rest of the week and see if things get any better. The second game of the season sees fan favourite (and by fan favourite I mean, he's my favourite player) Brandon Morrow toe the rubber against former Colorado Rockies' stud Ubaldo Jimenez. Jimenez was an all-star in the 2010 season, but has struggled to replicate his dominance since that campaign. This is strange since pitching at altitude in Coors Field would seem to inflate Jimenez's numbers, when in fact his years in Colorado were the best of his career. After a 2011 deadline deal sent Jimenez to the city of Cleveland he's done nothing but struggle in his year and a half in Progressive Field.

Ubaldo had an affordable option worth $5.75M for the 2013 season so the Indians bet that he could return to his ace form. It seemed that Jimenez relied too much on his four seam fastball last year even though he lost a mile per hour on the pitch. Combining this with almost completely abandoning his splitter resulted in Jimenez being hit a lot.

You can see in the graph that all of Ubaldo Jimenez's pitches are losing velocity (except his curve) which is definitely a bad sign for his future. (Ignore the 2013 numbers): 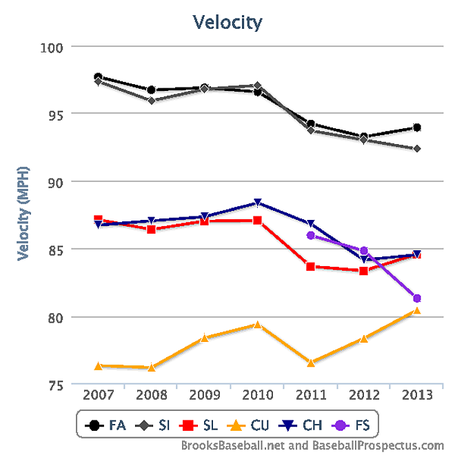 Against right handers, Jimenez is almost a completely fastball and slider pitcher, while he attacks lefties with a fastball, change-up combination. You can see below that Jimenez is pretty good at keeping sliders away from righties which should remind us how thankful we are that Rajai Davis is not our everyday left fielder hacking away at those outside off-speed pitches. 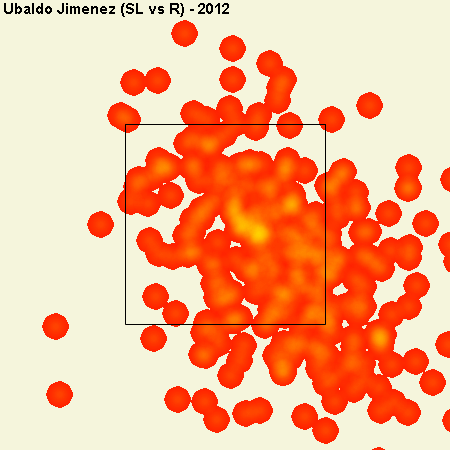 The key to the game will be the Jays forcing Jimenez into fastball counts where they can attack his mediocre hard stuff. With a 4.84 BB/9 rate in 2012, patience will be a deciding factor in determining whether the Jays can beat Jimenez or continue to sink deeper into the basement of the AL East.

As was the case yesterday, Ryan from Let's Go Tribe sent me his thoughts on his team's starter:

"Ubaldo Jimenez: The pitcher the Indians thought they were getting from Colorado was an ace. What they actually got was a mechanical mess who was one of the worst starting pitchers in baseball last year. Kept largely because his option was so affordable ($5.75M), the Indians will have a much quicker hook if Jimenez looks like he's going to be repeating 2012."

As you would expect, Ubaldo Jimenez is worse against lefties than righties and the line-up tonight will feature as many of them as it did last night. Hopefully Lind can get a hit or two to avoid impatient fans getting on his case just two games into the season.

It would take approximately 274,286 Ubaldo Jimenae placed head to toe to create a 6 foot tall protective wall around the Dominican Republic's shoreline. It would take some horribly unpleasant number of fractional Jimenae to make the wall water-tight."

The more you know. Enjoy the game everyone!