John Gibbons uses a lot of different lineup combinations. It means nothing at all.

Share All sharing options for: Lineup variation and overreaction

The 2013 Blue Jays lineup was supposed to feature Jose Reyes, Melky Cabrera, Jose Bautista, and Edwin Encarnacion as the top four. However, with Jose Reyes' injury, the initial injury to Brett Lawrie, and the struggles of many members of the Blue Jays offence, John Gibbons has had to be much more active in his construction of lineups.

Some have been critical of the moves for various reasons, some have been all for the near-daily lineup changes. Is it Gibbons' fault that some Blue Jays just can't seem to hit at this point?

The Jays currently average 3.65 runs per game, which puts them seventh-last in the league, one spot behind the Washington Nationals and four up on the Los Angeles Dodgers. The obvious difference between the Blue Jays and those teams is the pitching, but that is a matter for another time.

Gibbons, meanwhile, in his three full previous seasons with the Jays, used 102, 109, and 93 different lineups, and those teams won 80, 87, and 83 games respectively. Using many different lineups in a season doesn't seem to matter all that much. It's obviously an issue that doesn't have a single factor affecting it -- injuries, call-ups and platoons would skew results. Of course I'm looking at wins here as well, so pitching plays a very large part too.

The Blue Jays and Variation

The initial idea behind this article was to point out the fact that there is no need to panic because of the different lineups being used, despite what some media members might say.

Here are the last six lineups used by John Gibbons, via baseballpress.com. 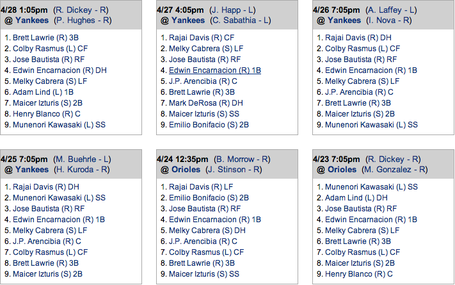 You'll notice that of these six lineups, no two are the same. Here are factors that would have affected Gibbons' decision-making:

To answer that last question, it should be some combination of Rajai Davis against lefties and not Rajai Davis against righties. Davis has posted a .285/.345/.437 line against lefties since 2011. Someone who might be a nice, if not strange leadoff man against righties would be Adam Lind, who is actually leading the team with a .404 OBP right now. Sure, he's not a typical leadoff man, but so what?

The Blue Jays offence is struggling. That's all this comes down to. John Gibbons is not to blame--he is doing his best to have his offence score more runs than the opposing offence. This may again involve moving players around - If Adam Lind is reaching base with more frequency than Brett Lawrie, then you ride the hot hand and put Lind higher in the lineup (against righties). The same goes for batting Munenori Kawasaki leadoff against righties when he was hitting well.

My first two articles on Bluebird Banter explored the lineup issue from a numbers standpoint, with references to The Book by Tom Tango. If you wish to read more in to the construction of a lineup, those two articles can be found here and here.