Who Are Ya: Jon Lester

Share All sharing options for: Who Are Ya: Jon Lester

Today Brandon Morrow will take on Jon Lester to kick off the three game series at the Rogers Centre. Lester pitched against the Blue Jays on April 7th, where Boston won 13-0. The original preview can be found here.

During the April 7th start, Lester went seven innings, giving up five hits and striking out six. As you can see he pounded the zone pretty well during the start: 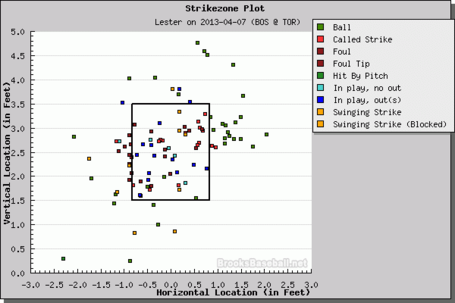 During the start Lester threw mainly fastballs, cutters, and curveballs, with eight changeups to the right handed batters as well. Throughout the game Lester attacked the hitters rarely wasting pitchers, which resulted in no walks being surrendered. In the bottom of the 2nd inning, Lester struck out Edwin Encarnacion with a fastball, curveball, fastball combination all well within the strikezone to get a quick three pitch punch-out. Here's Encarnacion whiffing on the inside fastball for strike three. 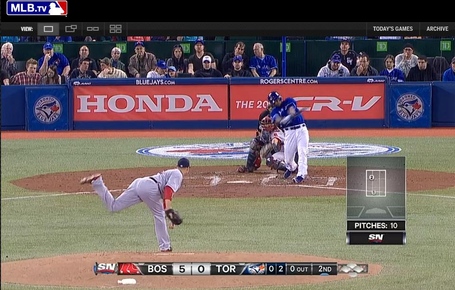 He also carved up J.P. Arencibia in the 5th inning on three aggressive fastballs:

The key for the Blue Jays today will simply be to make good contact when Lester attacks them, which is easier said then done. He's confident enough in his stuff to go right after Blue Jays hitters and pound the zone and it will be up to the Blue Jays' hitters to punish him for it.

Adam Lind didn't play during the first start against Jon Lester and it should be no different this time around. Lester has held lefties to under a .300wOBA in his career and this year has been no different. With the way John Gibbons has avoided letting Adam Lind face left handed pitching, the first basemen will definitely see the bench tonight.

Find the link between Jon Lester and the Philadelphia Phillies pitcher who had his only three career appearances in relief for the Phillies during the 1967 season.

Enjoy the last game of a terrible April folks.