Who Are Ya: Brett Myers

Share All sharing options for: Who Are Ya: Brett Myers

Will tonight be the night the Blue Jays get their first win? If so, they'll have to get some hits against 32 year-old right hander Brett Myers. He signed as a free agent in Cleveland for $7million with an $8million team option for next year. Myers spent most of his career in Philadelphia before moving to Houston and then to the Chicago White Sox.

Brett Myers is pretty much being paid by Cleveland to be an average pitcher who is a solid third starter. He has six pitches which include a four-seamer, two-seamer, cutter, curveball, slider and the occasional change-up. He hovers in the low 90's with his hard stuff and doesn't blow anyone away. His curveball is his best pitch and he gets almost 30% whiffs/swing with it. He uses the curve mainly against lefties (as you see below) resulting in a strange platoon split that is described in detail here. Since curveballs generally have reverse splits, righties (.332wOBA) have hit him slightly better than lefties (.324wOBA) over the course of his career. 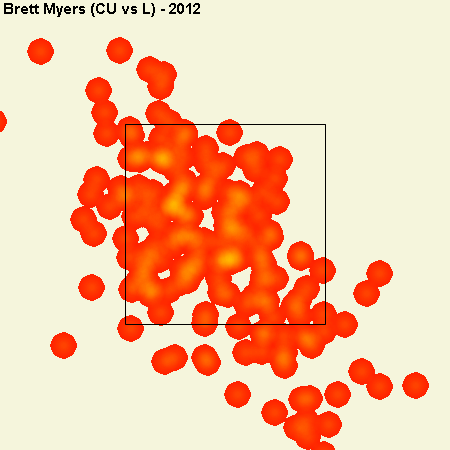 There isn't too much else of note for Brett Myers it seems. Last year there was a uptick in the velocity of all his pitches, but he was pitching out of the bullpen so it's not very surprising he gained some zip on his stuff. He's a guy who grinds out innings and will give his team around a win's worth of value each year.

"Brett Myers: Signed to help eat some innings in a rotation that last year pitched the second-fewest innings in the American League. The Indians could move him back to the bullpen if someone from their AAA rotation (Daisuke Matsuzaka, Carrasco, Bauer, Corey Kluber) deserves a promotion to the majors, but for now his job is to pitch 6 or possible 7 innings' worth of unspectacular baseball a start. "

As stated earlier, lefties have a harder time against Myers than righties, but the only other option would be Rajai Davis who struggles against righties with good breaking balls, which is Myers in a nutshell. Hopefully Adam can get a hit before the pressure of losing his job really starts to weigh him down.

The first "e" in Brett's surname tragically died of starvation during his ancestors' voyage to America in 1904. The "e" was given a burial at sea, and its body is believed to have taken up residence somewhere near the wreck of The Titanice.

Now it's time for a new section! We've had a new thing for every single one of these posts so if we project that to a full season, on the last day of the year there will be 162 different things on these posts. The new feature is called "Find the Link" and it involves finding the link between the starting pitcher and a person described with a clue. I think I'll keep track of the first person to guess correctly each day and at the end of the year announce the winner.

Today's "Find the Link" is

Answer first in the comments and win internet glory. Good luck and enjoy the game!