Who Are Ya: Félix Doubront

Share All sharing options for: Who Are Ya: Félix Doubront

The Red Sox come into the Rogers Centre tonight in a series that is flying under the radar (NOT). Félix Doubront, a 25 year-old lefty is on the hill for Boston, while Josh Johnson makes his Blue Jays debut. Last year was Doubront's first full season in the majors and he had a 4.86 ERA in 29 starts. Doubront has been pretty heavily hyped by the Red Sox since signing as an amateur free agent due to being a left handed pitcher with a mid-90's fastball.

When Félix Doubront is pitching well he can be almost unhittable sporting a 9.34K/9 last year, but has also struggled with control and inconsistency shown in his walk rate of almost four per nine innings. His repertoire includes fastballs of the two-seam and four-seam variety coupled with a change-up and curveball. Doubront also flashed a cutter 5.4% of the time last year. He is most effective when he attacks with a fastball change-up combo, while keeping hitters honest with the curveball.

Félix Doubront pounds the outside of the zone against right handed batters almost never venturing inside with any of his pitches. As you can see below, Doubront throws his two-seamer almost exclusively on the outside half so it will be important for the righties to avoid chasing the outside corner fastball moving away from them. As an aside, if Ricky Romero could command his two-seamer this well against righties it would help him out immensly. 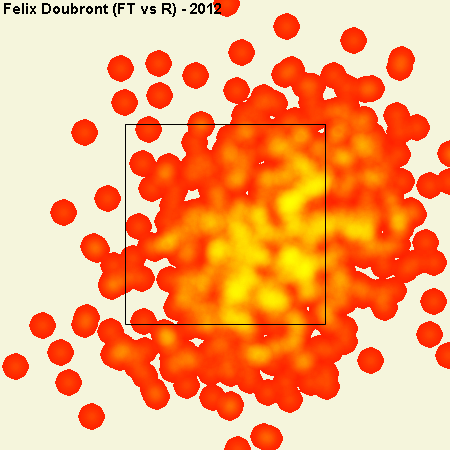 Another small thing I noticed that is largely irrelevant because of how rarely Doubront throws his cutter is the difference in release point between said cutter and the rest of his offerings. This difference likely has to do with him trying to get more horizontal movement on the pitch to differentiate it from his four-seamer. Maybe Kraemer or someone else can lend some insight and how the cutter is thrown compared to other fastballs. I'd assume it'd be easy for a hitter to see a pitch released two inches more horizontal than normal and identify it as a cutter. 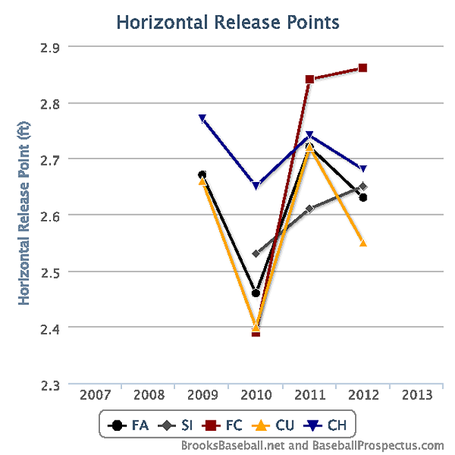 Should Lind Play: NO!

Only 20% of the batters Doubront faced last year were left-handed, but he was still slightly more effective against them (.332wOBA) than righties (.340wOBA). Couple this with Adam Lind who is still hitless this year (and still can't hit lefties!) results in what I'm fairly confident will be Rajai Davis' first start of the year. With Jose Bautista's ankle injury, putting Davis in right field and Bautista in the DH spot seems to be the most likely scenario.

Instead of a "Improbable Jumbotron Factoid" today, Gerse has made a pretty great "Vague Pop (In A Very Liberal Sense of The Word) Culture Reference WIth Boringly Few Degrees of Separation": 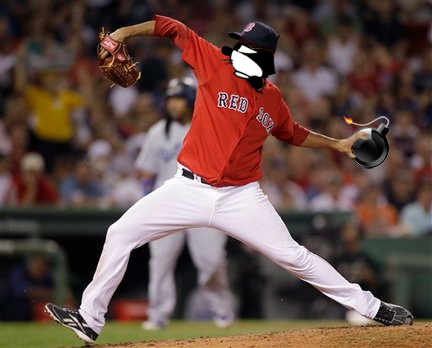 Yesterday Goldenhawk99 was the first to find the link between Brett Myers and Chris Brown so he has the early lead in the "Find The Link" competition. Today's "Find The Link" is:

Answer first and join Goldenhawk99 at the top of the leaderboard. Enjoy the game and remember to cheer as much as you boo!