Who Are Ya: John Lackey

Share All sharing options for: Who Are Ya: John Lackey

I had a dream (nightmare) last night that the Blue Jays lost today's game 15-2, and I woke up sweating and screaming hoping John Farrell wasn't standing over me with an axe. Luckily it was just a dream, right? Today's Red Sox pitcher is class act and right hander John Lackey who fits in nicely with the classy folks of the Boston area. He missed all of last year with Tommy John surgery and looks to pitch well in the back of Red Sox rotation in 2013, but even if he can't Boston has no one to replace him so it doesn't matter. If you don't know the secret about John Lackey these past few years, he gets paid a lot of money ($15.25 mil) to pitch poorly.

He features three fastballs (two-seam, four-seam, and cutter) plus three off-speed pitches in the form of a slider, curveball, and change-up. He hangs around the low-90's with his fastballs and had a fairly tame 6.08 K/9 in 2011. Over 20% of Lackey's pitches in 2011 were sliders and he almost never throws them for a hittable strike against righties so it will be important to lay off that pitch if Jays hitters can identify it out of his hand. 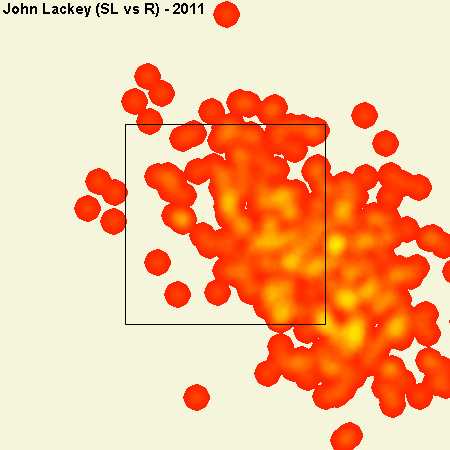 John Lackey has the usual splits for a right handed pitcher and struggles against lefties (especially in 2011). Facing 399 lefties he surrendered a .399wOBA while he gave up a .343wOBA against 344 righties. If he faced one less right handed bater last year that would be a pretty awesome coincidence (or maybe he pitches to his wOBA like Jack Morris would like). Lackey is almost completely a fastball-curveball pitcher against lefties so Lind and Rasmus should try to get in fastball counts to get a chance against Lackey's average hard stuff.

Yesterday in "Find the Link" Goldenhawk99 correctly found that Jesus Montero and Felix Doubront were both born in the same state in Venezuela. Siggian went even deeper and found they played on the same Venezuela Fall League team in 2009. They both picked up a point for their efforts. Today's "Find the Link" is:

Good luck and let's hope the Blue Jays can win this one!