Who Are Ya: Jon Lester

Share All sharing options for: Who Are Ya: Jon Lester

There's already some good stuff on the site today so I'll keep this pretty short. The Blue Jays and Red Sox aces will face each other today as R.A. Dickey goes up against Jon Lester. Lester is a dominant lefty who gave up two earned runs in his opening day win against the Yankees. The 2012 season was one of Lester's worst with an ERA north of four (4.82) for the first time since 2007.

About three quarters of Lester's pitches last year were either fastballs, cutters, or sinkers all in the low 90's so he definitely goes right after the batters. As you would expect Lester almost never throws his change-up against lefties, but he pounds the outside of the zone with it against righties leading to it being arguably his best pitch. 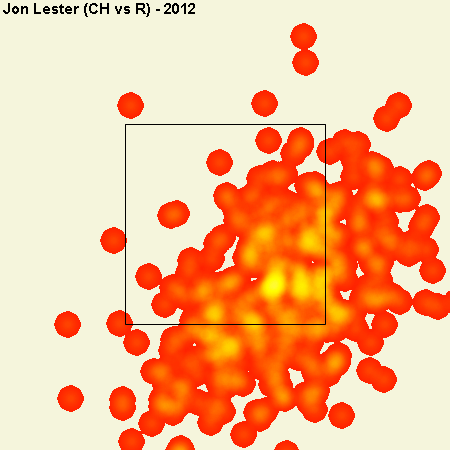 This is kind of cheating as the lineups have already been released:

Thankfully the Blue Jays are using their players more effectively this year sitting both Rasmus and Lind against the tough lefty. He has a .301wOBA against lefties and a .316wOBA against righties in his career. That being said, this lineup without the aforementioned Lind and Rasmus, plus the injured Jose Bautista is pretty ugly. The bottom of the order is where opportunities will go to die today.

Yesterday "expos&nordiques4ever" found the link between John Lackey and Kevin Fowler with the Red Sox pitcher appearing in one of Fowler's music videos. Today's Find the Link is:

This should be a fun game to watch today, so hopefully we'll see you all in the gamethread!