I must admit that I am a "Johnny Come Lately" (see Jeff Blair below) when it comes to tennis, but I have been noticing the rise of Tennis Canada in the last few years. On Saturday I saw an exciting doubles match in which Daniel Nestor and Vasek Pospisil led the Canadians to victory, and last night I saw Milos Raonic lead Canada to the Davis Cup semifinals at home in UBC. We will have to wait until mid-September (talk about losing momentum) to see Raonic face off against Novak Djokovic in the semifinals. Canada Crush!

Back to baseball, last night Back in Blue had their season premiere video podcast go live right here at 9 pm, and they will be broadcasting live every Sunday at 9 pm on Bluebird Banter. If you missed it you can check the first episode of the season right here, and consider donating to their Jays Care fundraising event this upcoming Saturday.

For folks in the Greater Toronto Area, Tallboys Craft Beer House (838 Bloor St. West) will be debuting a fun game called "Barstool Baseball," a board game where you get to play with your baseball cards! If that is not an enticing enough reason to visit Tallboys, know that they are serving the brand new baseball-themed Left Field Brewery's beer. See you there at 7:30 tonight.

Dickey’s Knuckler — Harder, Better, Faster - The Mockingbird
Jon Hale took a look at the knuckleballs of Blue Jays' struggling ace R.A. Dickey before the game on Sunday. At the end he wondered whether Dickey would go back to a slower knuckler, a quick look at Brooks Baseball shows that he still focused on the high-70s version:

Toronto Blue Jays’ R.A. Dickey draws boos from home crowd in lopsided loss to Boston Red Sox - National Post
John Lott does a good job at highlighting that it was "a loud minority" of fans who booed Dickey, rather than painting all the customers in the Rogers Centre with a single stroke. Even Dickey understood, saying that "I think real fans understand that it is indeed a marathon."

Voices: Can R.A. Dickey bounce back? - ESPN
ESPN polls their fans regarding what they thought about R.A. Dickey's bad start to 2013. The map that went along with their poll shows an interesting divide (I wish they had gradients showing how strongly each state was voting one way or the other) that does remind me somewhat of the Democrats-Republican divide: 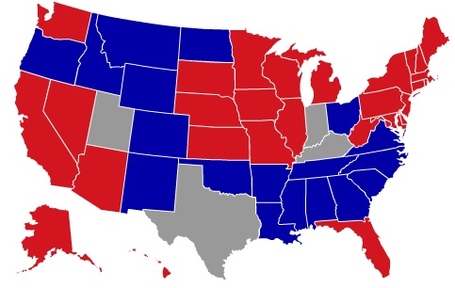 Blair: Early returns less than advertised - The Globe and Mail
Jeff Blair takes a look at the Twitter battle between the "Lifers" and "Johnny Come Latelys" (at least the dickish ones) during the game on Sunday. It was really too bad that he didn't include any examples in this piece. Blair also goes through several positions to look at the concerns as well as the positives.

An unsettling opening week - Sportsnet.ca
Shi Davidi reminds fans about R.A. Dickey's clunker last season against the Braves, a performance Dickey called "maybe even a click worse" compared to his Sunday start. Dickey will be working on small mechanical changes between starts. Davidi and Jose Reyes both agree that this upcoming road trip may be a blessing since they would be able to get away from off-field things a little.

Don’t sleep on Rasmus, Lind - Sportsnet.ca
Shi Davidi on why the Blue Jays haven't given up on Colby Rasmus and Adam Lind.

Lawrie makes progress, but still needs time - BlueJays.com
Evan Peaslee gave an update on the recovery of Brett Lawrie and Jose Bautista. I would be very surprised if Lawrie is back before the series against the Yankees (April 19) as he is scheduled to start batting practice only tomorrow in Dunedin.. Bautista believes he will be back by Tuesday, and boy does the lineup need him in there, especially with a struggling Edwin Encarnacion.

Emilio Bonifacio is Fast: A GIF Compilation - House of the Bluebird
Matt Gwin compiled some GIFs of Emilio Bonifacio's speed double a day before his nightmare game on Friday night.

Double to CF - Baseball is Magic
Greg Wisniewski steals Matt's GIFs and writes about Yunel Escobar's attempt at doing what Bonifacio did, and succeeding thanks to a blown call by C.B. Bucknor.

April 7 Blue Jays Talk - Sportsnet 590 (audio)
This edition of the Blue Jays post-game call-in show was fun to listen to. Actually, quite a few rational fans called in and reminded others to calm down, but of course we only remember the crazies. Here's just two of them... Mark in Caledonia (38:53) called in to talk about R.A. Dickey's "whole body of work" and then proceeds to analyze him using his career win-loss records, even saying "he is well under .500 without last year in mind." Tom Dakers in Calgary Thomas in Toronto (50:45) became one of my favourite JaysTalk callers ever (next to the Baseball God and the guy who called in to ask Wilner for tech support on his cable box). First, he starts off out of breath, then compared to how he has a right to boo Blue Jays players to "feel accountable" to how he has a right to call up Rogers customer service to "wreak havoc" when he doesn't get what he paid for. He believes that buying a ticket entitles him to "either to see the team score runs or see a pitcher pitch a very good game."

Thomas seems to be one of those people who thinks that having a right to do something means it's the right thing to do.

April 7 Minor League Report - Blue Jays from Away
Bookmark this website if you enjoy reading daily minor league results from the Blue Jays organization. The Buffalo Bisons lost, but the New Hampshire Fisher Cats, Dunedin Blue Jays, and Lansing Lugnuts all won on Sunday. Brief notes: the Phillies' AA team has been renamed to the "Reading Fightin Phils", Joel Carreno is pitching after his horrific offseason accident, and Roberto Osuna pitched very well in his full-season debut. The 18-year old (he was born in 1995--1995) is currently the youngest player in any full-season league.

I'll write a little more about the Bisons. On the good news front, Andy LaRoche has been on fire (as in being red-hot): he is hitting .471/.526/1.000 over 14 AB with 3 homers and 7 RBI. Bisons pitching was also on fire (as in being torched) on Sunday. Dave Bush, who was called up to Toronto Saturday morning, was supposed to start Sunday's game, but was replaced by Tyson Brummett (he of the beautiful locks) who was called up from the AA Fisher Cats. Brummett struggled mightily, giving up 5 runs, 3 hits, and 3 walks while getting just one out.

Cito Gaston credits Jackie Robinson for his success: ‘He changed the world’ - Canada.com
Alexis Brudnicki spoke with Cito Gaston, who recalled how racism touched his childhood and how much Jackie Robinson impacted his life and opened doors for minorities in the United States. How many of you are going to see 42 this Friday?

Sunday, bloody Sunday for many a frontline starter - SI.com
Jay Jaffe wrote about the aces that got battered on Sunday, who combined for a 9.80 ERA, wiht a .408 BABIP.

Carlos Marmol of Chicago Cubs out as closer 1 day after loss - ESPN
Carlos Marmol is the victim of a quick trigger, becoming the first closer to lose his job in the young 2013 season.

Anatomy Of A JaysTalk: Deep Dickeying - Drunk Jays Fans
Andrew Stoeten with a fantastic write up about all the callers from yesterday afternoon's Blue Jays Talk. (Language alert, as always)

Preaching Patience with R.A. Dickey - FanGraphs Fantasy Baseball
Chris Cwik looks closely at Dickey's start on Sunday and tells us that the world, probably, isn't over.

Not so fast, Toronto - The Hardball Times
Alex Connors figures that the Blue Jays are several wins short of a playoff berth. However, he somehow forgets to factor in last year's injuries for the Jays even though he does it for the Red Sox.

Bob Elliott with a grab bag of Blue Jays news and quotes.

Interview with Jesse Goldberg-Strassler, Voice of the Lansing Lugnuts - Blue Jays from Away

BJfA interviews Jesse Goldberg-Strassler, someone you all should listen to at least several times this year.