Another day, another waiver claim and DFA from the Blue Jays.

The Blue Jays have taken Mauro Gomez off waivers from the Red Sox. Mauro, a first baseman, was the International League MVP last season. Gomez has been assigned to Buffalo. He's 28 and gives us one more player from the Dominican Republic.

Gomez got caught in the numbers game this spring, the Red Sox DFAed him to make room for Jackie Bradley Jr, who made the opening day roster. Mauro is likely your basic Quad-A type, he's been good in Triple-A but hasn't been able to break into the majors. He'll be a useful part for the Bisons and, if we have injuries, could likely fill in without being too much of a negative for the Jays.

Here is a picture of him playing third, as a Red Sox last year, stolen from Over the Monster: 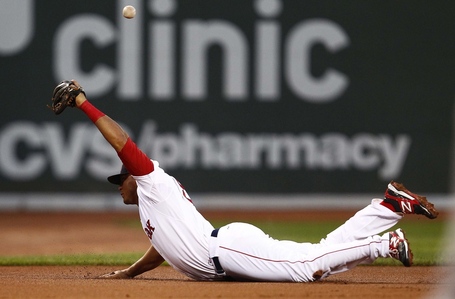 He really really isn't a third baseman but they ran into some injury troubles.

To make room, the Jays have designated David Bush for assignment. Poor guy. You think you have had a bad week? He gets called up, gets in one game, gets shelled (leads the AL in home runs allowed with 4), and then is DFAed. Talk about your range of emotions.

Bush might clear waivers, I'm not sure that there is a big market for soft throwing right-handers, so he might stay in the system. Jeremey Jeffress was designated for assignment just a couple of days ago too. Someone could have two birds and a Bush in their hands, should they want.