Who Are Ya: Anibal Sanchez

Share All sharing options for: Who Are Ya: Anibal Sanchez

After the day off on Monday, the Blue Jays go to Detroit to start week two of the season. Luckily Toronto will avoid Justin Verlander during the series, but still face some solid Tigers pitchers. Anibal Sanchez goes up against Brandon Morrow today. After being traded from Miami during the middle of the 2012 season, Sanchez went on to have 3.74 ERA for the Tigers during the rest of the regular season. He also started three games during the playoffs. During the offseason he re-signed with Detroit for five more years plus an option solidifying the front of the Tigers rotation with the aforementioned Justin Verlander.

Sanchez's only start this year came on April 3rd in Minnesota where he pitched five innings surrendering zero runs. Half of Sanchez's pitches are fastballs while the other half are made up of curveballs, sliders, and change-ups. He gets a pretty high number of swings and misses on his slider and change-up so if he's got a good feel for those pitches on a cold afternoon in Detroit it could be tough for Blue Jays' batters. 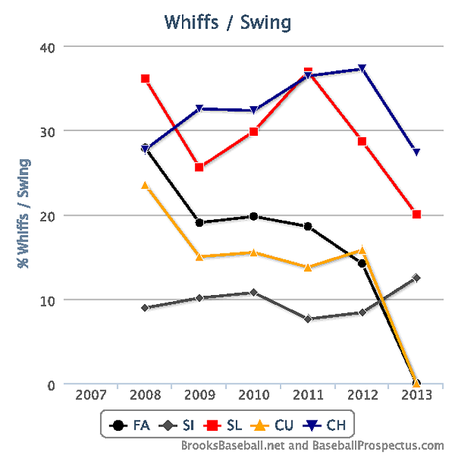 Similar to John Lackey, Anibal Sanchez relies almost exclusively on a fastball-slider combination against right-handers as you can see below. The Blue Jays didn't fare that well against Lackey before his bicep blew up on Saturday, so let's hope we don't see a repeat performance against Sanchez today. 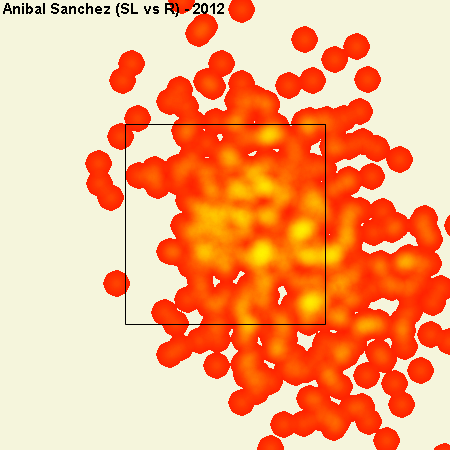 Sanchez has historically had slight reverse splits due to his more varied repertoire against lefties, but with very little depth on the bench, Adam Lind should still get the start. This will be an interesting match-up to watch to see how much faith the team should have in pencilling Lind into the line-up against tough righties.

Which Way Should The Switch Hitters Hit: RIGHT

I wouldn't be very surprised if the all the Blue Jays' switch hitters batted right against Sanchez in this game to limit his effectiveness. Similar to "The Danks Theory" employed by the Rays against Ricky Romero, batting right handed against Sanchez would heavily limit his use of the change-up and curveball allowing them to focus in on the fastball and slider. I'm very interested to see if they try this out in today's game.

Narcissist that he is, Sanchez always yells "ANIBAL!!!" when jumping into pools

Find the link between Anibal Sanchez and Jose Jimenez.

To finish up with another competition started in March, Damaso's Burnt Shirt takes home the "Bluebird Banter Bracket Bonanza"! You now have the right to put proof of your victory in your signature if that's what you're into. Minor Leaguer's random bracket picks came in a distant last place so I guess this tournament isn't a complete coin flip!