Who Are Ya: Clay Buchholz

Share All sharing options for: Who Are Ya: Clay Buchholz

Who is Clay Buchholz you might ask? One of the best pitchers in the league this year so far. He's been victorious in all five of his starts sporting a cool ERA of 1.19. He'll go up against Mark Buehrle, after the Blue Jays won last night thanks in large part to the power of Edwin Encarnacion.

Buchholz features the three main fastballs (four-seam, sinker, cutter) plus a curveball and changeup. He's been toping out in the mid-90's this year with his hard stuff and getting a lot of whiffs on his changeup, which he isn't afraid to throw to right handed batters as well. It's a bit surprising to see him throw his changeup so much to same handed batters, which makes you believe hitters have a hard time telling it apart from his fastball. 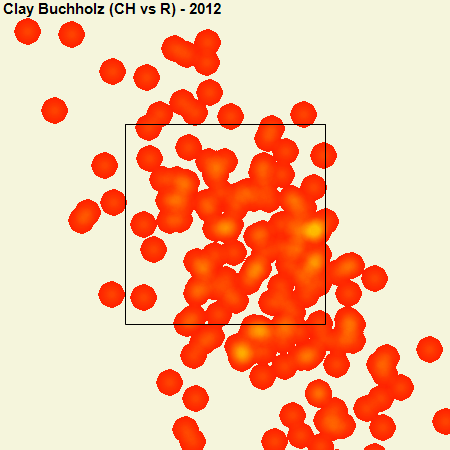 He has great command with all his pitches and has been striking out a lot more batters than usual this season meaning the Blue Jays hitters will be in tough if he has his best stuff.

Clay Buchholz has the traditional splits meaning he is slightly worse against left handed batters (.319 vs. .304 wOBA). Adam Lind had the night off last night, so he will most definitely have a spot in the lineup tonight. Hopefully Rajai Davis isn't needed against Buchholz, because his off-speed stuff would make Davis look lost at the plate.

Find the link between Clay Buchholz and Stephen Strasburg. (Hint: something was done to both of them)

Enjoy the game and hopefully the Blue Jays go streaking tonight for the first time in a long time!