Who Are Ya: Ryan Dempster (Take Two)

Share All sharing options for: Who Are Ya: Ryan Dempster (Take Two)

A series win at Fenway would be nice wouldn't it? Ryan Dempster takes on Chad Jenkins for the Blue Jays making his first start in the big leagues this season. The last time the Blue Jays faced Ryan Dempster was May 2, where the Red Sox won the game 3-1. The Canadian went six strong innings giving up four hits, three walks, and one run (a first inning home run by Brett Lawrie). Dempster struck out four batters in the outing. 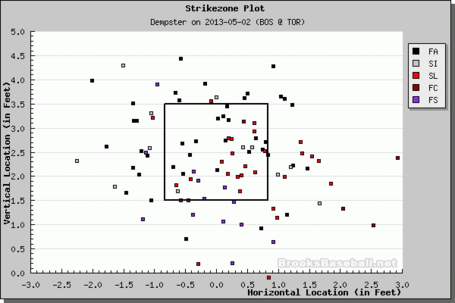 Adam Lind was one of Dempster's strikeout victims whiffing on two straight splitters and then going down to this slider after a few fastballs. At times, Dempster's off-speed stuff was nasty getting a lot of confused swings. 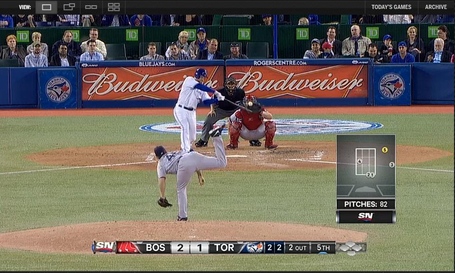 Although he pitched quite well, Ryan Dempster had some help from the umpire especially on this outside strikeout call that Brett Lawrie was not pleased about at all.

Although Lind had a pretty tough day against Ryan Dempster the first time he ever faced him ten days ago, what I said in the first preview about the matchup still stands.

Over the course of his career, lefties have an extra 44 points of wOBA against Dempster so Lind should definitely start today.

After his struggles versus the off-speed stuff the first time around, Lind should expect a heavy dosage of splitters and sliders once again from Ryan Dempster this afternoon.

Find the link between Ryan Dempster and the outfielder traded for Lou Pinella.

Please baseball gods, let the Blue Jays get a series win in Boston.