Looking at the Jays Bullpen Usage

The starters aren't going deep, so can you blame Gibbons for the 21st-ranked bullpen?

Share All sharing options for: Looking at the Jays Bullpen Usage

While the Toronto Blue Jays have struggled in the early going, one of the few bright spots has been the shut-down presence of Casey Janssen at the back end of the bullpen.

However, the bullpen itself has struggled, likely due to overwork and the carousel of 12th-men on the staff. The Jays rank 21st in bullpen ERA and 26th in bullpen FIP, an issue that’s doubly impactful since the group has thrown more innings than any other bullpen except Houston’s.

Obviously, John Gibbons can’t be blamed for starters not going deep into games, and the toll that has taken on the bullpen is obvious. The Jays have been forced to use 14 different relievers already, some of whom have no business pitching in the majors but were required to eat innings. When you also consider that Sergio Santos was pencilled in as a back-end guy but has pitched just 4.1 innings, it starts to get difficult to pin any blame on Gibbons for the bullpen’s lack of success.

In fact, in the offseason I took a look at his past bullpen management and didn’t take much issue with how he handled it. I wanted to dive into the bullpen stats in the early going here and see how he’s been handling this year’s group.

Leveraging the Platoon Advantage
Gibbons has three lefties at his disposal, and they’ve been three pretty decent options. The ageless Darren Oliver has a 2.81 ERA but a 3.83 FIP, dancing around some trouble in his early 16 innings. Aaron Loup hasn’t been quite the stud he appeared to be last year, with a 3.00 ERA but a 4.02 FIP and just a 14% strikeout rate, but he’s been usable. Brett Cecil has been the biggest surprise in the bullpen, transitioning to a capable arm with a 2.57 ERA and 2.45 FIP.

As relievers only, all three of these lefties have three-year FIPs below 3.00, meaning Gibbons has some real assets to play with. In the early going, he’s done a decent job matching them up against like-handed batters, leveraging the platoon advantage.

Oliver has faced just north of a normal share of lefties while Cecil has been heavily protected, facing 56% lefties. Loup has actually been left in to face a lot of righties, and this might explain some of his regression this year – last season he faced 51% lefties in the majors and has strong platoon splits in his admittedly short career so far.

With Oliver being essentially split-neutral over the past three seasons, the one suggestion I would make here is to shift some of Oliver’s LOOGY duties to Loup, which could help Loup without hurting Oliver much.

Using the Best Relievers with High Leverage
When trying to judge a manager’s bullpen usage, I like to look at a stat called gmLI. gmLI stands for Game Leverage Index, or the average leverage of the game situation when a reliever first enters the game (there is also pLI, which is total average leverage index, but this can be inflated by pitchers pitching poorly and making a mess or deflated by pitching well). Basically, if a reliever’s gmLI is greater than 1.00, he’s entering the game in above-average situations in terms of importance. Thus, we can get an indication of "manager trust" in a pitcher.

There are some confounding factors here, especially in a small-ish sample. For one, pitcher availability can change usage. Another issue is that it might not tell us anything – I previously tried to use gmLI to predict the "next in line" for closers around the league but it wasn’t any more telling that manager speak or even just strikeout rate.

It sure looks like Gibbons is leveraging his relievers properly – the seven guys I’ve identified as "core" bullpen guys (the first six on the list and Santos) come in the game in much more important situations than the mop-up guys, the guys who have basically been the taxi-squad between Toronto and Buffalo or the DFA line.

In particular, Janssen has come in in high leverage situations, which is not unsurprising given he’s the closer. I would recommend, however, that he starts being used more – the fact that he’s sixth on the team in relief innings is a minor crime. Don’t manage to the save rule, Gibbons.

It’s also interesting to note that Delabar and Oliver are the de facto "set-up guys," coming out in higher leverage situations than most.

But…Brad Lincoln? Why? A chunk of this is surely small samples blowing up his leverage number. I pulled his game log to see in which games he entered in an important situation, and it appears he’s been used three times in insanely high leverage spots, twice in neutral spots, and twice as a mop-up guy. In two of those high-leverage appearances (New York on April 26 and Tampa Bay on May 9), he imploded. He might be best suited as the "last man" in the pen.

Playing the Hot Hand
I’m not sure if I believe relievers are actually streaky or if they’re just really subject to variance, but I thought I’d quickly look at whether Gibbons appears to be deploying guys based on their current performance level or a more established performance level. The graphs below show gmLI versus current ERA and gmLI versus three-year FIP (or two-and-a-bit-year FIP, really, since it’s 2011-present). 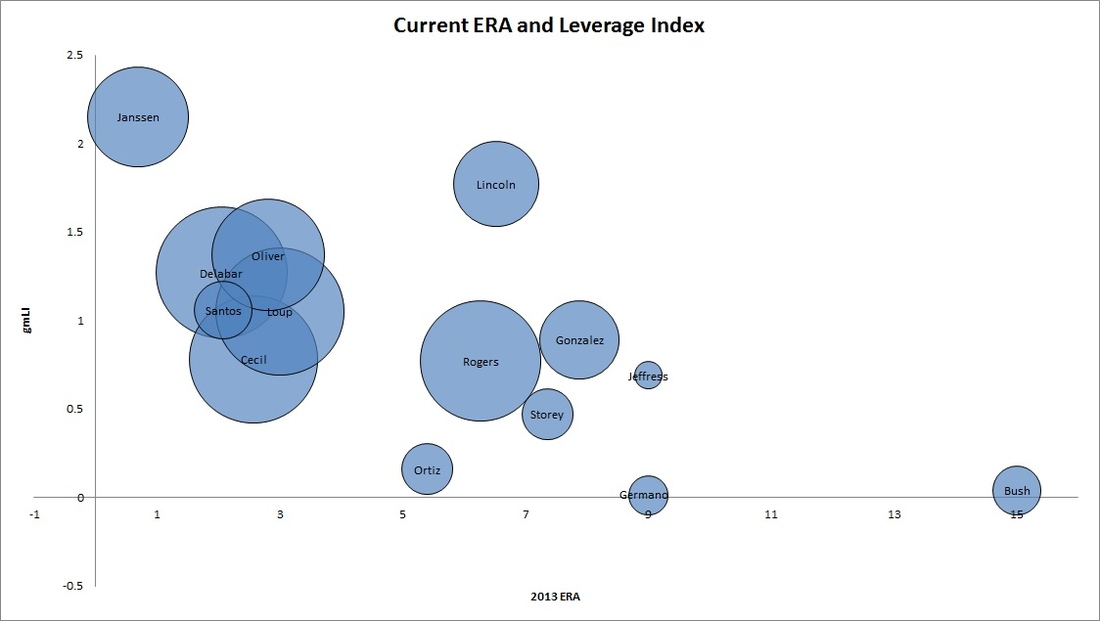 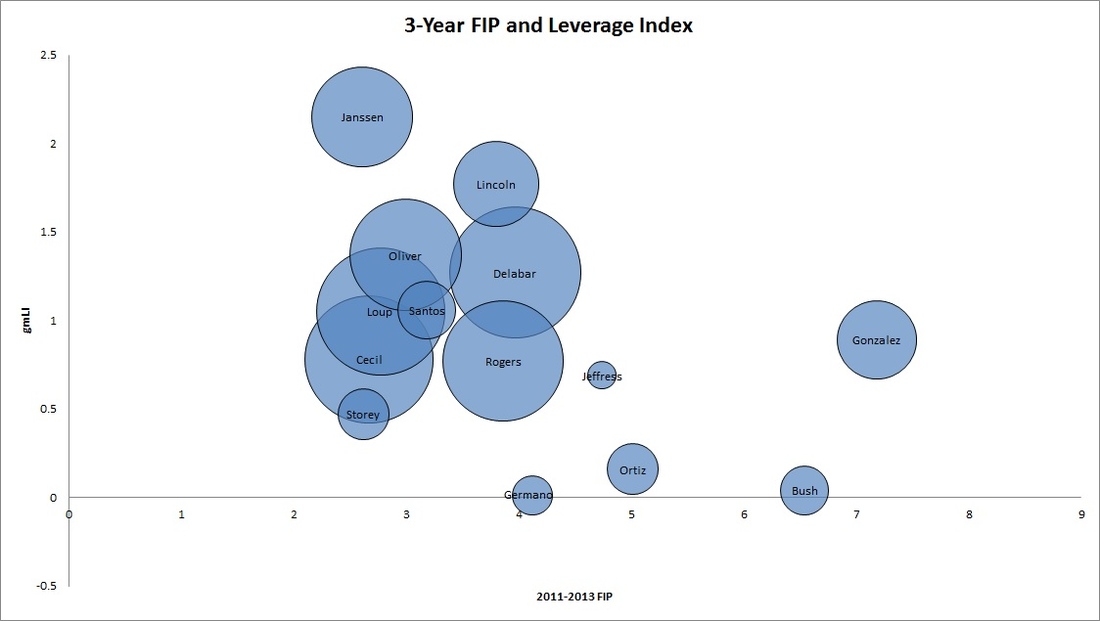 It’s hard to tell much of a difference from those but hey, they look kinda cool. I guess the two takeaways are that Gibbons appears to believe in Lincoln’s long-term profile over his current state (I mean, he DID get that huge opportunity against the Rays last week), and he believes in the current Delabar.

Have you been happy with Gibbons’ bullpen management so far? My only major complaint given the taxes on the pen and the unappealing options at the back end is the under-utilization of Janssen, who is absolute nails.